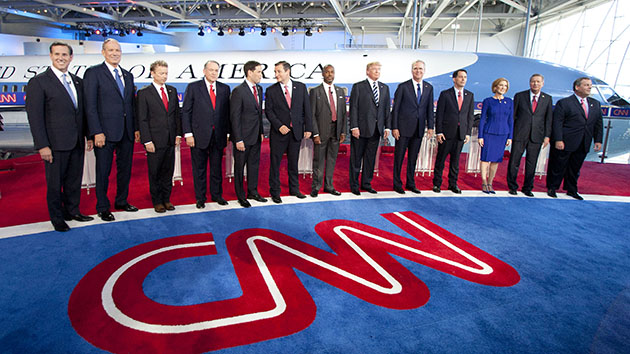 If Google searches are any indication, several of the GOP candidates dominated the others during tonight’s two debates. The first debate included Sen. Lindsey Graham, Gov. George Pataki, Rick Santorum, and Gov. Bobby Jindal. The event seemed to be dominated by Graham’s quips about drinking, and his lack of time spent in libraries. Graham also saw a surge in Google searches, according to Google Trends:

Based on Google traffic, Lindsey Graham led the JV debate for the majority of the program: http://t.co/a4JUuH0O2l pic.twitter.com/EL52k4XvDE

It’s clear that Graham saw a surge in attention Wednesday night, and a lot of people were saying he “won.” But Jindal also seemed to liven up his lackluster campaign by attracting some more attention:

So about the theory that Graham “won” pic.twitter.com/sjpKW7VvXz

Then, during the main event, GOP front-runner Donald Trump did well, as usual. But former Hewlett Packard CEO Carly Fiorina came out strong and held her own all night. Google searches showed her right up there with Trump and Dr. Ben Carson, and even ahead of them at certain points:

Carly Fiorina with a huge spike on Google: pic.twitter.com/e0DnoU1tTV

And perhaps Jeb Bush helped himself a bit, especially when he told Trump to apologize for dragging his Mexican American wife into the race:

Fiorina going strong tonight, but look at the spike when Jeb’s wife was mentioned: pic.twitter.com/tlzQL7vc7P