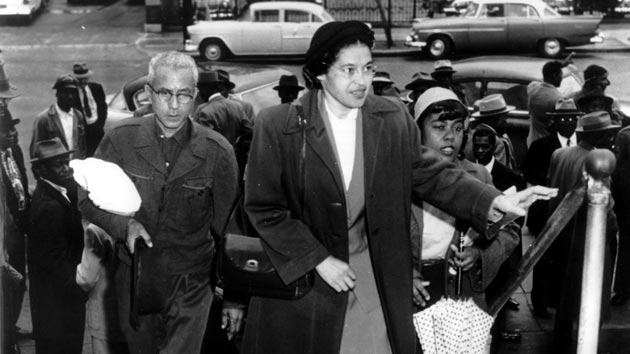 Rosa Parks arrives at court to be arraigned for the racial bus boycott in 1956.AP

At the end of last night’s GOP debate, moderator Jake Tapper asked the candidates which woman they would choose to put on the $10 bill. Several of the 11 candidates on stage named their daughters or wives. Mike Huckabee awkwardly poked fun at his wife’s spending habits in nominating her. “That way,” he said, “she could spend her own money with her face!”

But Sen. Marco Rubio, Sen. Ted Cruz, and Donald Trump went for gravitas. All three picked Rosa Parks, the civil rights leader whose refusal to give up her seat sparked the Montgomery bus boycott, to be the first woman pictured on US paper currency. “An everyday American that changed the course of history,” said Rubio. “She was a principled pioneer that helped change this country,” noted Cruz, clarifying that he would put her on the $20 bill, in order to keep Founding Father Alexander Hamilton on the $10 bill.

The candidates are right that Parks was a “principled pioneer,” but her advocacy went beyond racial justice. Later in life, Parks was an avid supporter of Planned Parenthood, and she even served on its board.

That’s an inconvenient fact for the GOP candidates who have been eager to demonize Planned Parenthood. Throughout the debate, all of them repeatedly touted their pro-life records and vowed to defund Planned Parenthood. Cruz is currently leading the charge against Planned Parenthood in the Senate, threatening to shut down the government over a spending bill that includes federal funding for the women’s health organization.

Cruz elaborated on that ongoing funding battle at the debate, honing in on the doctored sting videos that purport to show Planned Parenthood officials selling fetal organs for profit—a criminal allegation that state after state has found to be false. “Absolutely we shouldn’t be sending $500 million of taxpayer money to funding an ongoing criminal enterprise,” Cruz said of Planned Parenthood. “And I’ll tell you, the fact that Republican leadership in both houses has begun this discussion by preemptively surrendering to Barack Obama and saying, ‘We’ll give in because Obama threatens a veto.’ We need to stop surrendering and start standing for our principles.”