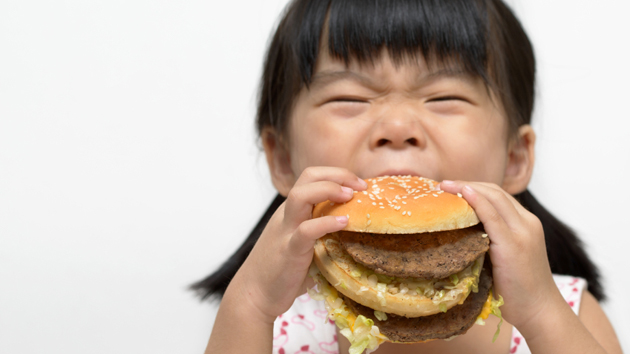 Every day, more than a third of children in the United States eat fast food. A new report from the Centers of Disease Control and Prevention also showed that teens eat twice as much fast food as younger children; on average, 17 percent of teens’ daily calories come from fast food.

Fast food consumption among children grew between 1994 and 2006, rising from 10 percent to 13 percent. The new report, which used data from the CDC’s 2011-2012 National Health and Nutrition Examination Survey, shows only a slight decrease—overall, kids ages 2 to 19 consume 12 percent of their calories from fast food. Surprisingly, these numbers weren’t different across socioeconomic status, gender, or weight.

Percentage of children and adolescents aged 2–19 years who consumed fast food on a given day, by calories consumed: United States, 2011–2012 Centers for Disease Control and Prevention

Over the last 30 years, childhood obesity in the United States has more than doubled. Between 1980 and 2012 the number of kids considered obese increased from 7 percent to 18 percent and the number of teens during that same period quadrupled.

In an interview with USA Today, Sandra Hassink, president of the American Academy of Pediatrics, pointed to fast food ads geared toward kids as a main factor in the soaring obesity rates. Indeed, as my colleague Kiera Butler wrote earlier this year, McDonald’s, in an effort to revive its flagging sales, is marketing inside schools:

Over at Civil Eats, school food blogger Bettina Elias Siegel explained in December that McDonald’s targeting of kids is no accident. Rather, it’s part of the company’s strategy to revive its flagging sales. In a December conference call, Siegel reported, McDonald’s then-CEO Don Thompson and the company’s US President Mike Andres told investors that the company has “got to be in the schools. When you look at the performance relative to peers of the operators [whose] restaurants are part of the community–it’s significant.”

Hassink also noted that diet-related diseases, like type-2 diabetes, are affecting Americans at much younger ages than they used to. (In fact, the youngest type-2 diabetes patient on record, a three-year-old girl, was recently diagnosed.)  This, said Hassink, should be cause for concern:

“Childhood is not a place where you can say, ‘Let everyone eat what they want and we can fix it later.’ “Hassink said parents should remember that daily choices about food can contribute to long-term chronic disease. “Health doesn’t happen by accident,” she said.