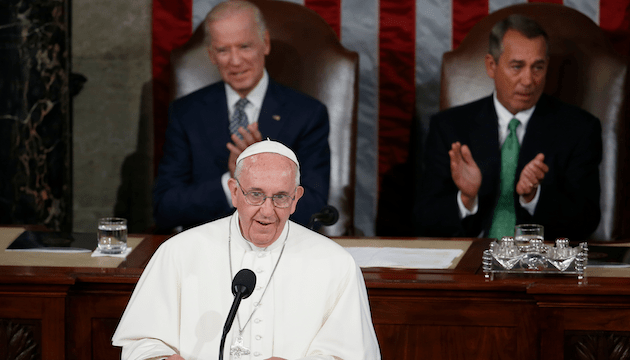 On Thursday, Pope Francis delivered his much anticipated speech before a joint Congress. In his remarks, which marks the first time the leader of the Catholic Church has spoken before a U.S. Congress, Francis urged lawmakers to focus on the “common good” of human society, specifically to protect vulnerable members of society and the environment.

“You are called to defend and preserve the dignity of your fellow citizens in the tireless and demanding pursuit of the common good, for this is the chief aim of all politics,” Francis said. “A political society endures when it seeks, as a vocation, to satisfy common needs by stimulating the growth of all its members, especially those in situations of greater vulnerability or risk.”

Francis also directly addressed the struggles of immigrants crossing the border and the current refugees crisis in Europe.

“We must not be taken aback by their numbers, but rather view them as persons, seeing their faces and listening to their stories, trying to respond as best we can to their situation,” he said.

“Let us remember the Golden Rule: ‘Do unto others as you would have them do unto you.'”

The Golden Rule was a theme he continued to invoke in order to underscore his positions on income inequality, abortion, and capitol punishment.

For weeks leading up to the historic speech, Francis’ address has been a point of contention for some Republicans who view his outspoken messages on combating climate change and income inequality to conflict with the party’s stance on these issues. Last week, one Catholic congressman even announced he would be boycotting the speech altogether.

Read his speech in full here.