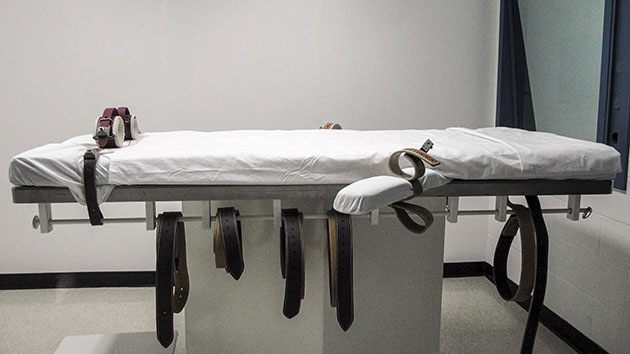 Update 2, 10/1/15: Today, Oklahoma Attorney General Scott Pruitt asked the state court of criminal appeals for an indefinite stay of Glossip’s execution, as well as those of two other men with upcoming lethal injection dates. The request comes after corrections officials were forced to halt Glossip’s execution last night after realizing that they’d received the wrong drug for the lethal injection. The attorney general’s office told the court that it needed “time to evaluate the events that transpired on September 30, 2015, [Oklahoma Department of Corrections’] acquisition of a drug contrary to protocol, and ODOC’s internal procedures relative to the protocol.”

Update 9/30/15: An hour after the US Supreme Court denied Glossip’s petition for certiorari, Oklahoma Gov. Mary Fallin (R) issued a last-minute stay of Glossip’s execution on Wednesday afternoon. In an executive order, Fallin wrote that the 37-day stay was “due to the Department of Corrections having received potassium acetate as drug number three for the three-drug protocol.” The stay, she wrote, will allow the state to determine whether the drug complies with execution protocol, or whether the state can obtain potassium chloride, a different execution drug.

Time may have run out for Richard Glossip—again. The Oklahoma death row inmate, whose case has become a cause célèbre for activists and prominent figures who maintain he’s innocent, has twice been spared from execution at the last minute. Most recently, hours before he was scheduled to be put to death in mid-September, Oklahoma’s court of criminal appeals issued a stay in Glossip’s case after his lawyers filed new evidence of his innocence. But on Monday, the court paved the way for his execution, which is scheduled for Wednesday, when it denied Glossip’s request for a hearing on this information.

Glossip, who had no criminal record before landing on death row at the age of 33, never killed anyone. He was convicted of hiring another man to murder his boss, Barry Van Treese, at a seedy Oklahoma City motel in 1997. There was no physical evidence tying Glossip to the crime. He was convicted almost solely on the testimony of Justin Sneed, who confessed to bludgeoning Van Treese to death with a baseball bat. During Sneed’s interrogation, the police told him he could escape a death sentence if he would implicate and testify against Glossip—giving him a big incentive to lie.

Glossip has always maintained his innocence, and he repeatedly turned down offers from prosecutors to plead guilty to second-degree murder, a move that would have saved his life. Glossip’s lawyers, some of the top death penalty attorneys in the country who are working pro bono, have asserted that Sneed was an IV meth addict and have questioned the reliability of his testimony. Indeed, Sneed’s story has changed repeatedly over the years.

In a last-ditch effort to save Glossip’s life, his lawyers have filed affidavits from a variety of witnesses attesting to the unreliability of Sneed and alleged misconduct by the police. One of those witnesses is Sneed’s former drug dealer, who claimed Sneed regularly robbed customers at the Best Budget Motel, where he worked as a handyman, to support his drug habit. Glossip’s lawyers also filed an affidavit with the Oklahoma court from Michael Scott, a man who was in the cell across from Sneed in prison. Scott, who came forward after seeing Glossip’s lawyers on Dr. Phil, says Sneed admitted in prison that Glossip had nothing to do with the crime. His attorneys have also submitted testimony from a forensic pathologist who says the prosecutors wrongly introduced testimony in Glossip’s trial suggesting that it took Van Treese eight hours to die when in fact the autopsy showed that he died almost instantly. (This expert also notes that the autopsy photos are missing from the court records—a major oversight, but not unusual in this case, where quite a bit of other evidence has been destroyed or disappeared.) Richard Leo, one of the nation’s leading experts on police-induced false confessions, additionally provided testimony that the police in Glossip’s case used an interview technique with Sneed that is almost certain to elicit false statements.

This evidence hasn’t swayed Oklahoma Gov. Mary Fallin, who denied Glossip’s request for a stay of execution. It also failed to convince the court of criminal appeals, which in a 3-2 vote declined Glossip’s request for a hearing on that evidence, arguing that it was merely an expanded version of information that had already been considered by the court. In her dissent, Judge Clancy Smith said “the tenuous evidence in this case is questionable at best,” and argued that Glossip should at least be afforded a hearing to make his case for innocence. The other dissenting judge, Arlene Johnson, said Glossip never received a fair trial, and thus she believed denying him a hearing would “call into doubt the fairness of the proceeding and the reliability of the result.”

Glossip’s lawyer, Don Knight, released a statement after the court issued its decision, saying, “This case splintered the Court of Criminal Appeals—a 3-2 vote. Two judges believed a further stay of execution and a hearing on innocence was required on the facts. We should all be deeply concerned about an execution under such circumstances.”

Glossip’s final hope of staving off the death chamber is a last-minute intervention by the US Supreme Court, where his lawyers filed a petition for certiorari Tuesday afternoon. The progressive group MoveOn.org plans to stage a rally outside the court on Tuesday evening to urge the justices to halt his execution.

Glossip, who is slated to be put to death at 3 p.m. on Wednesday, has escaped imminent execution twice this year. The first time came in late January, when Glossip came within a day of being executed before the US Supreme Court took up his challenge to the state’s lethal injection methods and the use of the sedative midazolam. The drug has been implicated in botched executions, including one in Oklahoma last year. The high court ultimately ruled against Glossip in June, leaving Oklahoma free to execute him. But he once again won a last-minute reprieve on September 16, when the criminal appeals court granted a temporary stay.

Oklahoma seems determined to proceed with Glossip’s execution at all costs, despite high-profile and international appeals to spare his life. Glossip’s lawyers allege prosecutors have recently made efforts to intimidate witnesses who have come forward with evidence of Glossip’s innocence, including Michael Scott, who served five years for armed robbery in the same prison as Sneed. After filing his affidavit, Scott refused to talk to David Prater, the elected district attorney handling the case. As a result, Glossip’s lawyers allege, Prater had Scott arrested last Tuesday for failing to complete his community service and pay less than $200 in fines related to a minor DUI and a marijuana arrest last year. (Glossip’s lawyers say Scott was in a car accident and has been unable to work, causing him to fall behind on his fine payments.) When Joe Tapley, Sneed’s former cellmate, filed a similar affidavit on Glossip’s behalf, prosecutors filed to revoke his suspended sentence in a DUI case. Prater, who has called Glossip’s claims of innocence a “bullshit PR campaign,” has refused to comment on the arrest.

Prosecutors have declared both of the former inmates liars, drug addicts, and “inherently suspect” as witnesses. Glossip’s attorneys have alleged the state has leaked negative information about Scott to the media to discredit him as a drug user with a history of lying.

But in a case where evidence has been destroyed and where the state’s star witness is also a well-documented liar and former drug addict, almost everyone is “inherently suspect.” As Knight told a local media outlet recently, prosecutors’ criticism of his witnesses is ironic given that “Justin Sneed was a drug user and a liar in 1997, and apparently what he has to say is good enough for the government.”