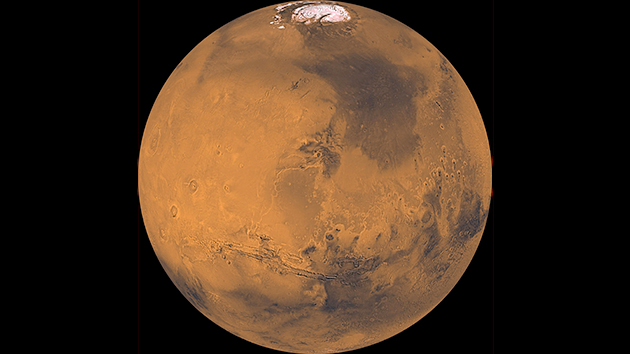 Scientists have known for several years that there is ice on the surface of Mars. But liquid surface water—which many believe would be a prerequisite for life—has remained elusive. Until now.

This morning, NASA scientists announced that satellite images have revealed traces of liquid water on Mars’ surface. The water is salty, which keeps it from quickly freezing or evaporating.

The researchers were able to identify the telltale sign of a hydrated salt at four locations. In addition, the signs of the salt disappeared when the streaks faded. “It’s very definitive there is some sort of liquid water,” [lead scientist Lujendra] Ojha said…

Liquid water is considered one of the essential ingredients for life, and its presence raises the question of whether Mars, which appears so dry and barren, could possess niches of habitability for microbial Martians.

Here’s a bit more detail from the Guardian:

Liquid water runs down canyons and crater walls over the summer months…The trickles leave long, dark stains on the Martian terrain that can reach hundreds of metres downhill in the warmer months, before they dry up in the autumn as surface temperatures drop. Images taken from the Mars orbit show cliffs, and the steep walls of valleys and craters, streaked with summertime flows that in the most active spots combine to form intricate fan-like patterns.

Scientists are unsure where the water comes from, but it may rise up from underground ice or salty aquifers, or condense out of the thin Martian atmosphere.