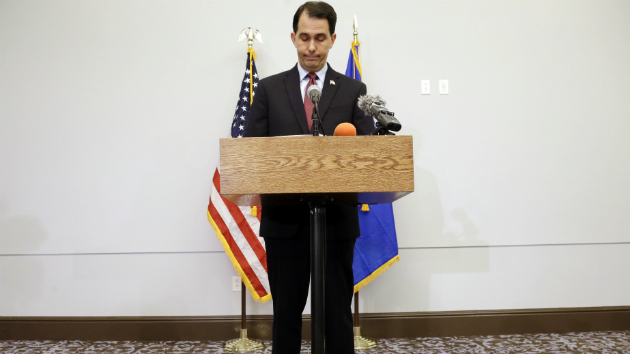 Scott Walker on Monday, bowing out of the presidential race.Morry Gash/AP

A sullen Scott Walker appeared at a brief press conference in Madison, Wisconsin, on Monday afternoon to announce that he was “suspending” his presidential campaign, citing an overcrowded field. Walker never mentioned Donald Trump by name, but his exit underscored how the bombastic businessman turned GOP front-runner has altered the race in a way few would have predicted. Walker, who began the year with a commanding lead in Iowa and what many suspected was the explicit support of the libertarian billionaire Koch brothers, polled at less than one-half of 1 percent in the most recent national polling. He encouraged other remaining GOP candidates to follow his lead, “so the voters can focus on a limited number of candidates who can offer a positive conservative alternative to the current front-runner.”

Despite his strong start and sterling conservative credentials—winning three elections in the once-progressive bastion of Wisconsin and breaking the backs of public unions in that state—Walker’s standing has tumbled steadily in recent weeks. In the latest GOP debate on CNN last week, he looked flat and hesitant to jump in amid a format encouraging the candidates to spar with one another. His constituents were also turning against him, with his approval rating reaching an all-time low last month. Even some of Walker’s political allies in the Republican-held Wisconsin legislature criticized Walker after he tried painting himself as a political outsider, despite having held elected office for 23 of the 25 years since he left college.

Following the CNN debate, the chatter was that Walker’s biggest donors were demanding wholesale change to his campaign. Back when Walker led in the polls, profiles of him tended to focus on the fact that he served as his own chief strategist—which apparently left few options when the donors came looking for a fall guy. Top donors were also said to be scheming to get rid of campaign manager Rick Wiley. But as recently as Friday, Walker said on a conference call with donors that he was going to make no changes.

Apparently that wasn’t going to cut it. “Donors have totally dried up for Walker,” a campaign insider told the New York Times, because “the candidate and the campaign just couldn’t inspire confidence.”

The most interesting question amid the wreckage of Walker’s campaign may now be this: Where will his wealthy backers go with their money? In July, the super-PAC supporting Walker, Unintimidated PAC, reported having locked up more than $20 million, placing him in the top echelon of GOP candidates in terms of financial backing. The bulk of the money, $13.4 million, came from just four people, including Wisconsin-based roofing supply magnate Diane Hendricks, a longtime supporter who gave $5 million.

Most of Walker’s war chest came from outside traditional sources, in part because he never achieved much traction in strongholds for GOP campaign money such as Texas. Instead, his campaign and super-PAC seemed to rely on big donors whom Walker had cultivated for his state political runs and who were based in the Midwest. Hendricks, for example, has never laid out such large sums of cash for political causes as she has for Walker; the next largest check she has written to a national group was $1 million (donated last fall to the Koch-affiliated Freedom Partners Action Fund). With so many candidates remaining, Walker’s biggest impact on 2016 may have to do with where his deep-pocketed former backers turn next.