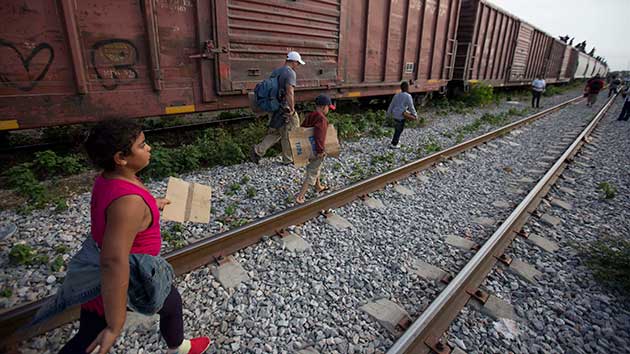 Migrants walk along the tracks in Ixtepec, Mexico, in July 2014.Eduardo Verdugo/AP

In September 2014, in an effort to keep more child migrants from risking the dangerous journey north, President Barack Obama approved a plan to let some Central American kids apply for refugee status without leaving their home countries. Now, more than a year later, only a tiny fraction of applicants have gotten approval to come to the United States.

Roughly 4,600 kids have applied to the Central American Minors Refugee/Parole Program. To be eligible, minors must be from El Salvador, Guatemala, or Honduras, and they must have a parent living legally in the United States. However, just 90 applicants have been interviewed so far by the Department of Homeland Security, the final step before the government makes a refugee decision.

Of those, 11 have been conditionally approved for refugee resettlement in the United States. Another 76 have received humanitarian parole—a category, according to US Citizenship and Immigration Services, that is “used sparingly to bring an otherwise inadmissible alien into the United States for a temporary period of time due to a compelling emergency.”

Meanwhile, another 35,000 unaccompanied minors were apprehended along the US-Mexico border in the 2015 fiscal year, which ended in September, and tens of thousands more have been picked up in Mexico, where the government recently cracked down on Central American migrants at the request of the United States.

A State Department official who asked not to be named defended the program, noting that the small number of interviews is the result of a lengthy screening process that can take 18 to 24 months. “We all would like that to go faster,” she said. Wendy Young, executive director of Kids in Need of Defense, a nonprofit that helps find pro bono counsel for immigrant and refugee children, said that while the program is a start, “it hasn’t, frankly, been a perfect system.”

When the State Department rolled out the Central American Minors program in December, advocates were concerned that limiting it to kids with parents legally living in the United States made it too restrictive and would turn away truly endangered kids. That didn’t stop Senate Republicans from blasting the program in an April judiciary committee hearing titled “Eroding the Law and Diverting Taxpayer Resources.” Alabama Sen. Jeff Sessions—one of Congress’ loudest anti-immigration voices—stated that “rather than stop the new illegal immigration wave, it appears that the results, if not the objective of this program, is to capitulate to the illegality.”

“Resettlement to the United States is a golden ticket.”

To combat child trafficking, the Central American Minors program requires refugee applicants and their US-based family members to take DNA tests. Parents have up to six months to give a sample, and only after the tests confirm a parent-child relationship will DHS go ahead with interviewing the child in Central America. “We don’t want our refugee family reunification program—and this CAM program is a variant of that—to be used for people to try to bring kids to the United States who aren’t their own,” the State Department official said, adding that “several hundred” applicants have submitted DNA samples to date. “Resettlement to the United States is a golden ticket.”

Beyond that, Central American minors have found building successful refugee cases to be particularly tricky, even with help from attorneys working with organizations like Kids in Need of Defense. Many claim to be fleeing violence caused the region’s powerful gangs. But the official said they often can’t prove that they face persecution on account of a so-called protected ground, such as race, religion, social group, or nationality. It appears as though those kids are receiving humanitarian parole through the Central American Minors program. Yet this does not grant them any immigration benefits and is meant to be temporary. (That didn’t stop Breitbart from blaring, “96 Percent of Interviewed Central American Minors Approved to Fly to U.S.”)

As Young is quick to point out, the situation in Central America hasn’t improved much from just a year and a half ago, when Obama called the surge of child migrants “an urgent humanitarian situation.” Guatemala’s president recently resigned at the center of a corruption scandal, El Salvador has endured renewed violence following the end of a gang truce, and Honduras’ murder rate is still the worst in the world. And according to an upcoming report by social scientist Elizabeth Kennedy, 83 people deported by the United States in the past 21 months have been killed upon their return to El Salvador, Guatemala, or Honduras.

“The idea that the ‘crisis’ is over makes me cringe a bit,” Young said. “To me, it went from a boiling-over situation last year to a constant simmer. But it could start boiling over again at any time.”