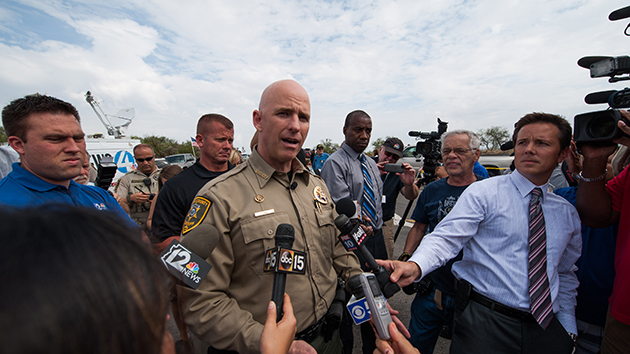 Sheriff Paul Babeu speaks to the press gathered in July 2014 in Oracle, Arizona, approximately 50 miles from Tucson. He discussed his concerns over the expected arrival of a few dozen unaccompanied minors of Central American origin.Will Seberger/Zuma

In 2008, Babeu was elected sheriff of Pinal County, a large county bordering the southeast portion of the Phoenix metro area. A statement released on his website Monday, decrying “President Obama’s unconstitutional power grabs” and pointing out his anti-illegal immigration bona fides, announced his plans to win the 1st Congressional District seat being vacated by Rep. Ann Kirkpatrick, a Democrat who is running for US Senate.

“I’ve spent seven years fighting Washington’s inaction and now it’s time to bring the fight directly to our nation’s capital,” Babeu said. “I will work tirelessly to protect the residents of rural Arizona, shrink the federal government, overturn Obamacare and guard against attacks on the 2nd Amendment.”

Babeu will be running for a seat in 2016—after unsuccessfully trying to win the same post in 2012. At the time, Babeu was a rising GOP star known for his tough talk on illegal immigration. But then his former boyfriend, Jose Orozco who was an immigrant from Mexico, told the Phoenix New Times that Babeu’s attorney threatened to start deportation proceedings against Orozco unless he signed an agreement that would prevent him from discussing their years-long relationship. Orozco and his attorney instead went to the New Times and reported the alleged threat. In reporting that story, the paper discovered that the sheriff had “posted lewd photos of himself” on dating websites and “e-mailed photos of his erect penis and selfies in his underwear” to men he’d met online.

The day after the story was published, Babeu held a press conference and acknowledged that he was gay, but he denied threatening Orozco. Babeu claimed that Orozco was a jilted lover who was mad that the relationship ended and had illegally accessed his campaign and other online accounts. He didn’t deny the veracity of the photos, and said his personal life wasn’t anybody’s business.

A subsequent investigation by the state’s attorney general cleared him of any wrongdoing.

Since then, Babeu has remained sheriff of Pinal County and has found new ways to be controversial. In 2014, he told a crowd at a Republican political event that a group of Central American children caught at the US-Mexico border would be bused to a facility north of Tucson, Arizona. Babeu’s actions, as described in a scathing Arizona Republic editorial, caused “totally predictable chaos” when protesters descended on the site and ended up surrounding two buses carrying local children headed to a YMCA day camp. Babeu showed up at the site and said he was the peacemaker, according to the paper.

The paper described the sheriff as “a self-obsessed camera hog” and slammed him for what he did.

Think of the pyromaniac who torches his own house, then throws himself on the mercy of the court as a homeless waif. According to one protest organizer, Babeu told her “the only way to stop this was for our community and the area to organize.” And so he did, effectively, organize and manipulate the incident. Then he sent out a host of Pinal County deputies to maintain some semblance of the peace he single-handedly threatened. That’s gall.

Babeu will be running in an already crowded GOP primary, facing off against former Arizona Secretary of State Ken Bennett and Gary Kiehne, an Arizona businessman with experience in oil and ranching.

Clarification: An earlier version of this article misstated Orozco’s immigration status. It’s unclear whether he was in the country legally or illegally.