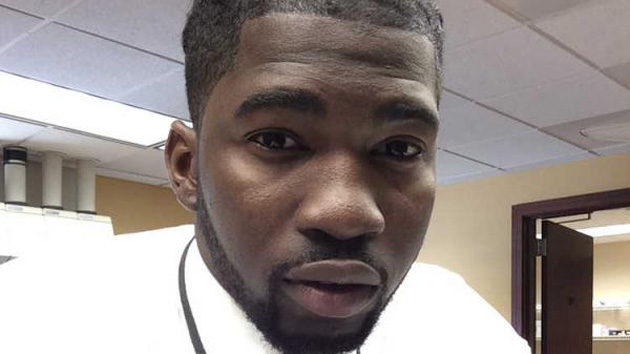 A disturbing video obtained by NBC News shows sheriff’s deputies in Georgia using a stun gun to shock a mentally ill black college student in the groin after handcuffing him to a chair.

The student, Mathew Ajibade, died shortly after the incident early on January 2. Two sheriff’s deputies and a nurse at Chatham County jail in Savannah were charged with involuntary manslaughter in connection with the death, and the video was shown in court proceedings on Friday.

Ajibade had been taken into custody after being accused of domestic violence during what his family described as a bipolar episode, according to NBC. He was also accused of battery and obstruction of an officer.

In the video, Ajibade can be heard screaming after discharge from the stun gun hit his flesh.

In another video shown in court last Wednesday, several officers can be seen throwing Ajibade to the floor in a pre-booking area of the jail and beating him after he allegedly resisted their instructions to sit down, according to Savannah Morning News.

Once subdued, officers placed a spit mask over Ajibade’s mouth and handcuffed him to a restraining chair in an isolation cell, NBC reported. In the minute-long video of the stun gun incident, Ajibade can be heard screaming after discharge from the stun gun hit his flesh. He was then allegedly left unattended for an hour and a half before being found unresponsive. A coroner in June ruled his death a homicide by blunt-force trauma suffered during the struggle in the pre-booking room. An autopsy report cited “a combination of abrasions, lacerations, [and] skin injuries about the head and some other areas of the body.”

Nine deputies who were on duty at the time of the incident were fired, according to NBC. Jason Kenny, the deputy who used the stun gun on Ajibade, is currently standing trial along with Maxine Evans, another deputy, and Gregory Brown, a nurse at the jail. On Tuesday a superior court judge in Chatham County acquitted Brown of the involuntary manslaughter charge, according to Savannah Morning News, but he still faces charges of committing public records fraud and giving a false statement to investigators, after he allegedly signed a restraint chair log for Ajibade without reading it.

Ajibade’s family is being represented in court by Mark O’Mara, the attorney who successfully defended George Zimmerman in the shooting death of Trayvon Martin in 2012. Of the treatment of Ajibade in custody, O’Mara told NBC, “It is nothing less than torture. It’s sadism.”

Update (10/16/2015): A jury has acquitted two ex-deputies of involuntary manslaughter charges in Ajibade’s death. The ex-deputies have been convicted of lesser charges, including cruelty to a prisoner and falsifying records, according to NBC News. A nurse involved with the case has been found guilty of perjury after falsely claiming to have checked on Ajibade before his death, NBC reported.