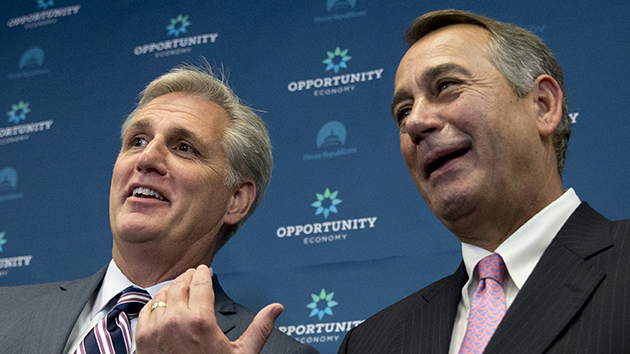 Rep. Kevin McCarthy (R-Calif.) and House Speaker John Boehner (R-Ohio) have a bit of a mess on their hands.Carolyn Kaster/AP

GOP land went crazy on Thursday when Rep. Kevin McCarthy (R-Calif.) abruptly pulled out of the race to replace Rep. John Boehner (R-Ohio) as House speaker. Tweets and headlines frequently employed the word “chaos” to describe what happened after McCarthy withdrew. The news caused major reverberations throughout the political world, yet much of the rest of the country was probably wondering why everybody was freaking out. Here’s a quick primer:

What the hell happened? When Boehner announced in late September that he would be stepping down as speaker, it was widely seen as his way of dealing with a “constant conservative rebellion,” as the Washington Post put it. Boehner, for all his right-wing bona fides, was viewed by a sizeable chunk of House Republicans as not being sufficiently conservative. And they were waiting to pounce on him, should he dare push compromise legislation on federal spending that would avert a government shutdown or a debt crisis. So rather than be held hostage by the tea party mob, Boehner decided to quit before they could mutiny; this, he calculated, would win him the opportunity to steer his party around a shutdown, at least for a few months. Enter McCarthy, who was Boehner’s second-in-command. He seemed to believe he was the heir apparent, yet the tea party House Republicans felt he wasn’t strident enough and might be too willing to govern—that is, craft deals, say, on the debt ceiling. McCarthy headed into Thursday’s GOP vote as the odds-on favorite, but the tea partiers rebelled and let it be known they weren’t keen on a Bohener 2.0. The question facing McCarthy: could he become speaker in the middle of a civil war? And did he want to? Meanwhile, McCarthy and other Republicans received an email from a conservative donor and activist threatening to expose McCarthy’s rumored affair with Rep. Renee Ellmers (R-N.C). McCarthy announced he wasn’t the right guy for the job.

So, wait, he was having an affair? Rumors of McCarthy’s alleged affair with Ellmers have been flying around conservative news outlets since at least January. This gossip could have prompted the letter sent by Rep. Walter Jones (R-N.C.) to House Republicans on October 6 calling on “any candidate for Speaker of the House…[to] withdraw himself from the leadership election if there are any misdeeds he has committed since joining Congress that will embarrass himself, the Republican Conference, and the House of Representatives if they become public.” Both McCarthy and Ellmers have denied the affair, and Ellmers’ attorney sent a letter to one site asking for the removal of a story suggesting the rumor. To date, there’s no proof the affair is anything more than a rumor. But it’s sure something that folks in Washington like to talk about.

Who’s left in the running? Now that McCarthy is out of the running, the game is wide open. Rep. Jason Chaffetz was in the race before McCarthy dropped out, but he acknowledged that he didn’t stand much of a chance, and he has his own baggage. Rep. Daniel Webster of Florida had also been in the race, but he had garnered little support. Still, Webster has the backing of the House Freedom Caucus, the group of tea partiers who helped oust Boehner and sink McCarthy. But Webster faces an uphill battle with nearly a dozen other Republicans reportedly considering entering the fray. That’s not to mention the very public wooing/begging of Rep. Paul Ryan (R-Wisc.) to seek the post. Ryan, the 2012 vice presidential nominee under Mitt Romney, is the choice of establishment Republicans, including Boehner. He initially told reporters he didn’t want the job, but he did cancel two days of fundraising amid growing pressure, apparently from Boehner and others, to ponder the possibility. As of Friday afternoon, there was no telling who might be in the best position to succeed Boehner.

Is it true that the new speaker doesn’t even have to be a member of the House of Representatives? That’s right. In their wisdom, the Founding Fathers noted, per the US Constitution, that the speaker slot does not have to be filled by a current member of the House. So there have been all sorts of fun suggestions:

Trump Should Be Speaker — And Still Run for President. Seriously http://t.co/FaFHHkS15D

Mitt Romney for Speaker of the House? I mean, House Republicans could do way, way worse. I say go for it @MittRomney!

URGENT: Call every GOP Congresswoman Congressman at 202-225-3121. Politely ask for their support of Newt Gingrich for Speaker. @newtgingrich

“@Cjsticklen: Now that McCarthy is out for Speaker of the House, does this open things for new Republican Kim Davis?” Too good not to share

But seriously, does this mean a Democrat could get elected speaker? Theoretically yes, but probably not (make that definitely not). To get elected, a person would need a simple majority of the 435 House members to vote for him or her. Back-of-the-napkin math puts that figure at 218, and it’s very unlikely that a Democrat could get every other Democrat vote, plus nearly 60 Republicans. Republicans hold 247 seats, so it’s much easier for one of them to get to the magic 218 threshold. Complicating things for the Republicans is the fact that the tea party wing of the House, including the Freedom Caucus, has more than 50 members. Any Republican wanting to win the speaker’s role has to get some tea party buy-in.

What’s in store for Boehner now that the process to select his successor is FUBAR? As mentioned earlier, Boehner wanted out because of the constant pull from the far right of his party—and the never-ending threat that the tea partiers would rebel and sink his speakership. Under constant threat of a vote of no confidence, Boehner had to continually manage a fractious party. Boehner joked recently that he had a terrible nightmare that he couldn’t leave the House. Well, that might be coming true. But Boehner isn’t leaving the speaker’s office role until a successor is named. The vote for a new speaker was—until the McCarthy retreat—scheduled for October 29. Now there is no vote scheduled. So Boehner may well be living his nightmare. But for the rest of the nation, that might not be so bad, because Boehner no longer has to bend to the will of the tea party on issues such as raising the debt ceiling and avoiding a government shutdown. Did Democrats ever think they’d be glad to have Boehner stick around?

Does that mean it could be a good thing—for the country, that is—if Boehner keeps the job, at least for a little while? There are some very contentious issues looming in the immediate future. In the coming weeks, whoever is speaker will have to corral a divided party, as Congress grapples with another debt ceiling crisis and a potential government shutdown. Some time between November 10 and 19, the United States will run out of liquid assets, according to Quartz. A US default on debt payments could rattle global economies, cause stocks to plummet, and derail any semblance of an economic recovery. Tea party Republicans have used the debt ceiling as a weapon in the past, and they are likely to try again this time. There’s also a threatened government shutdown if Congress can’t agree on a broader spending plan that needs to be approved by December 11. If Boehner remains as speaker through this stretch and no longer cares about keeping his job, he will be in a better position to allow votes that will bring together Democrats and non-tea-party GOPers to duck a financial crisis and a shutdown. No doubt, that will enrage the tea partiers and cause them to reach for the pitchforks. But the worst they can do to Boehner would be to bounce him from a job he no longer desires. And the GOP-on-GOP conflict that will ensue will be the next speaker’s problem.