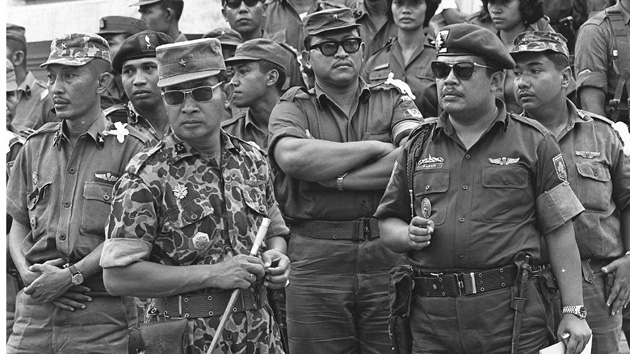 Fifty years ago today, one of the biggest mass murders of the 20th century began in Indonesia. On the heels of a Cold War-era military takeover, between 500,000 and 1 million people were slaughtered by the army and civilian death squads—with support from the US government. Starting in October 1965 and continuing through much of the next year, these Indonesian victims were accused of being communists, whether or not they supported the country’s communist party: Many were targeted simply because they were seen as opponents of the new US-supported, military-backed Indonesian regime.

In Germany, Rwanda, and Cambodia, mass killings have been followed by truth-and-reconciliation commissions or trials. In Indonesia, despite a transition from military rule toward democracy that began in 1998, there haven’t even been memorials for the victims. The killers were never brought to justice, and many of them remain in power today. Meanwhile, the US government’s own role in the bloodshed remains unclear, as key documents related to the atrocity are classified. Even so, researchers and journalists have dug up some damning evidence of American involvement. Here’s a rundown of what happened and what we do know. 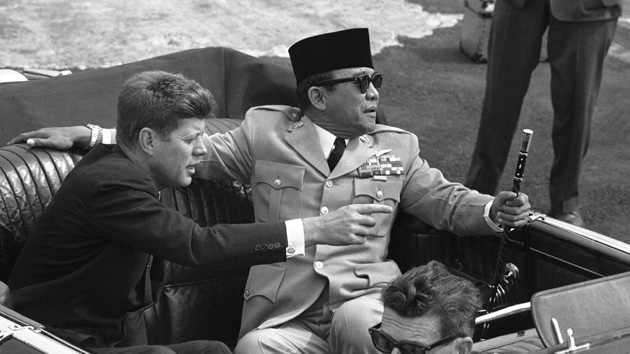 President John Kennedy and Sukarno share a car at Andrews Air Force Base near Washington in 1961. AP

During the the Cold War, why was the United States concerned about Indonesia? After Indonesia won its war of independence against the Netherlands in 1949, a hero of the struggle named Sukarno became president. The United States was not a fan of his politics: Though he was not a communist himself, he was an anti-West populist-socialist who took steps after the war to nationalize plantations and other lucrative assets. He also protected the rapidly growing communist party, known as the PKI, which by 1965 was the biggest such organization outside of a communist country. The United States conducted covert operations during the late 1950s intended to weaken Sukarno’s government and strengthen the staunchly anti-communist Indonesian military. “They considered the army to have the muscle to balance Sukarno,” says Indonesian journalist Andreas Harsono, a researcher for Human Rights Watch.

What sparked the mass murders? In the early hours of October 1, 1965, a group of army conspirators killed six generals in Jakarta, the country’s capital. Maj. Gen. Suharto, who would soon become Indonesia’s dictator for more than three decades, took control of the armed forces, claiming that the killings were part of an attempted communist coup. Then he and the military launched a campaign to purge Indonesians believed to be connected with the communist party or left-leaning organizations. They also targeted hundreds of thousands of Indonesians unconnected to the party who they saw as potential opponents of their new regime, including union members, small farmers, intellectuals, activists, and ethnic Chinese. The carnage was so intense that people stopped eating fish—fearing that the fish were consuming the human corpses flooding the rivers. 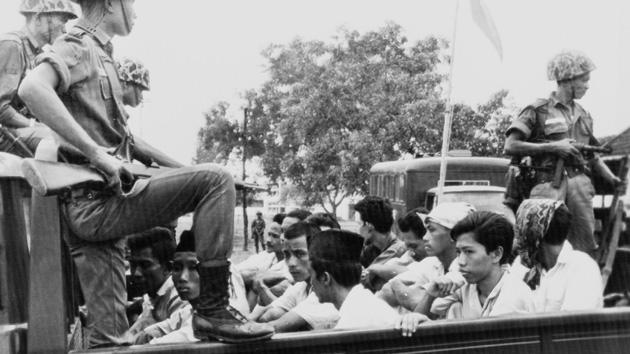 Members of the youth wing of Indonesia’s communist party are taken to a Jakarta prison on October 30, 1965. AP

So, how was the United States involved? Speculation abounds over the US role in the 1965 military takeover, though there’s no concrete proof in the public record that America had a direct hand in it. However, investigations by journalists, as well as government documents, have made it clear that the United States provided money, weapons, and equipment to the Indonesian military while it was undertaking the killings. What’s more, according to excerpts of contemporary cables released by the US State Department, officials at the US embassy created lists of thousands of names of communists and provided them to the military. It has been reported that the CIA worked on the lists, too, but the agency has denied involvement, Harsono says.

How was the genocide covered by the US press? “It was presented in the American media as good news,” says Joshua Oppenheimer, a filmmaker who has spent the past 12 years investigating the mass murders and producing two award-winning documentaries about them. He cites a 1966 story in Time magazine that said the killings were the “best news for years in Asia.” In a report at the time for NBC News, a correspondent spoke with an Indonesian man in Bali who claimed that the island, famous for its tourism, had “become more beautiful without communists,” and that “some of them wanted to be killed.” The correspondent noted that Indonesia boasted “fabulous potential wealth in natural resources” before showing footage of so-called communist prisoners at a labor camp on the island of Sumatra, some of whom, he said, would be starved to death or released from the camp to be killed by local citizens.

What’s the situation in Indonesia today? Military rule ended in 1998 when Suharto was forced out, but even today many of the perpetrators of the killings remain in power, immune from prosecution. (Under Indonesian law, soldiers cannot be taken to trial in civilian courts.) Schools continue to teach that it was necessary and good to wipe out “the communists,” and the government has yet to issue a national apology or establish a truth-and-reconciliation commission. “It was the darkness period,” says Harsono. “I have hope that sooner or later the Indonesian government will apologize and overcome the handicap to learn the truth of that darkness.” Over the last 50 years, the nation has remained a key US ally in the region. Home to some 250 million people, Indonesia is the world’s most populous Muslim country and an important backer of the United States in the so-called war on terror. Oppenheimer believes a US acknowledgment of its role in the killings might embolden Indonesia’s current president, Joko “Jokowi” Widodo, to address what happened.

Is anyone pushing for more accountability? Human Rights Watch and other activists have for years called on the US government to declassify all relevant documents, and today Sen. Tom Udall (D-N.M.) reintroduced a resolution in Congress calling for their release. Oppenheimer’s documentaries have brought new public attention in both countries to the period. In his first film, The Act of Killing (2012), which was nominated for an Academy Award, he identified several of the killers and convinced them to reenact the murders they committed. “They offered boastful accounts of the killings, often with smiles on their faces and in front of their grandchildren,” Oppenheimer explained in a recent New York Times op-ed. “I felt I had wandered into Germany 40 years after the Holocaust, only to find the Nazis still in power.” In his second documentary, The Look of Silence (2014), a death squad leader looks straight into the camera and says, “We should be rewarded with a trip to America—if not by airplane, a cruise will do. We deserve it! We did this because America taught us to hate communists.”