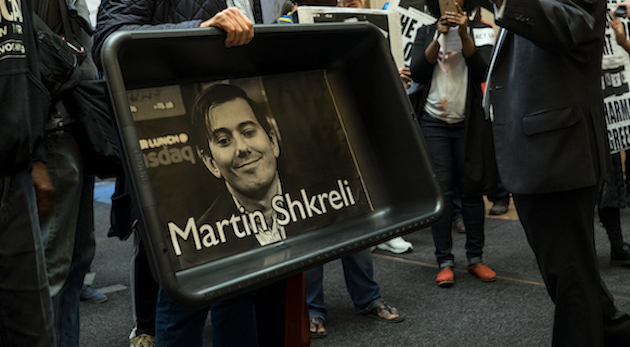 Martin Shkreli, the pharmaceutical executive who back in September was caught price-gouging an HIV drug by more than 5,000 percent, is upset with Bernie Sanders.

After attempting to donate to the Vermont senator’s presidential bid—with an offering of $2,700, which Sanders’ campaign swiftly declined—the “most hated man in America” took to Twitter last night to claim that he was so enraged by the public rejection that he punched a wall and was left with a broken wrist.

Ugh, does anyone know how to treat a wrist fracture without going to a hospital?

This is such bullshit. pic.twitter.com/t0Hgx8xdmy

But Shkreli’s “broken wrist” is probably just one petulant cry for attention. As noted by Twitter user Mike Leeman, who used the power of reverse image search to expose yet another layer of pharma sliminess, it’s looking highly likely that the X-ray posted by Shkreli is actually a stock image of a fractured wrist.

@MartinShkreli, reverse image search is a bitch. Best part of it all? It’s free.

“IDK” is right. Perhaps hoping to detract attention away from the escalation of conflicting medical opinions, soon after this exchange Shkreli posted a photo of himself playing the guitar—no visible signs of a fractured wrist either.

Bored playing guitar. Who wants to hear a song? pic.twitter.com/3aCsrg4So1