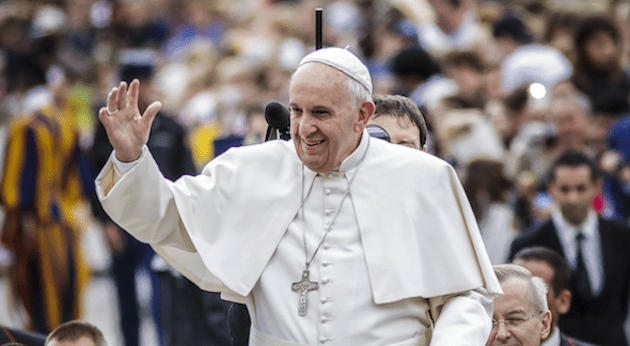 On Friday, the Vatican sought to provide a few more details concerning Pope Francis’ meeting last week with Kim Davis, the defiant Kentucky clerk who was jailed for her refusal to issue gay marriage licenses in Rowan County.

“The pope did not enter into the details of the situation of Mrs. Davis, and his meeting with her should not be considered a form of support of her position in all of its particular and complex aspects,” official Vatican spokesman the Reverand Federico Lombardi said in a statement.

The clarification follows a wave of controversy this week after Kim Davis revealed she had a private meeting with the pope during his historic visit to Washington, and claimed Francis gave her and her husband rosaries and told her to “stay strong.”

“Just knowing that the pope is on track with what we’re doing and agreeing, you know, it kind of validates everything,” Davis said in an interview with ABC.

Days of speculation followed over whether the meeting in fact occurred, and if so, whether it put into question how truly progressive some believed the pope was. Some on social media professed to be shocked that the leader of the Catholic Church might endorse the politics of Davis and not support same-sex marriage, despite the church’s clear stance opposing the issue.

Why Pope Francis’ meeting with Kim Davis is such a disappointment. http://t.co/66R3LTRulK pic.twitter.com/vFwiQnozmV

Next you’re going to tell me the Pope is Catholic… http://t.co/FVFVnEdaUx

BREAKING: The Pope does not have your politics.

Eventually the Vatican confirmed the encounter, but with scant detail. Friday’s statement appeared to downplay the importance of their meeting.

“Pope Francis met with several dozen persons who had been invited by the Nunciature to greet him as he prepared to leave Washington for New York City,” Lombardi said.