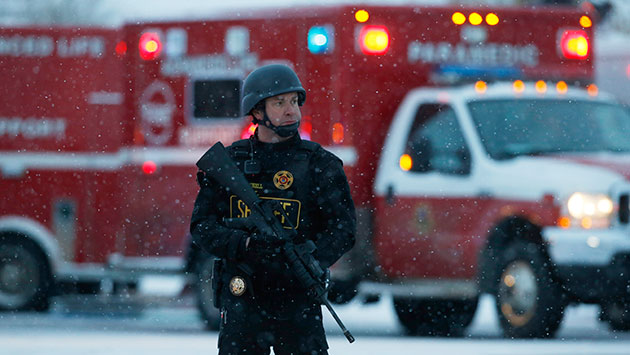 Update, 11/28/15, 11:22 a.m.: In a statement released Saturday morning, President Barack Obama condemned Friday’s violence and called for stricter gun control measures, while praising local law enforcement for their work. “This is not normal,” he said. “We can’t let it become normal. If we truly care about this—if we’re going to offer up our thoughts and prayers again, for God knows how many times, with a truly clean conscience—then we have to do something about the easy accessibility of weapons of war on our streets to people who have no business wielding them. Period. Enough is enough.”

Colorado Springs Police have confirmed that the suspect in custody for Friday’s shooting is Robert Lewis Dear. The 57-year-old suspect is being held at the El Paso county jail without bond and will appear in court on November 30. Colorado Springs Mayor John Suthers told the Denver Post on Saturday morning that the identities of the two civilians who were killed would likely be released later Saturday or Sunday.

Update, 11/27/15, 5:05 p.m.: Police arrested the alleged gunman Friday afternoon after an hours-long standoff with law enforcement. Eleven people were taken to the hospital with injuries, including five police officers.

An investigation is underway and authorities say the gunman left behind items, according to the Colorado Independent.

The Colorado Springs police department is reporting that three officers and an as-yet-undetermined number of other people were shot earlier today outside a Planned Parenthood clinic. The department says the shooter is contained to a specific area but has not yet been apprehended. The department warned residents and reporters to stay away from the area of the shooting. Police have closed Centennial Boulevard in both directions and ordered nearby stores and restaurants to keep customers inside. 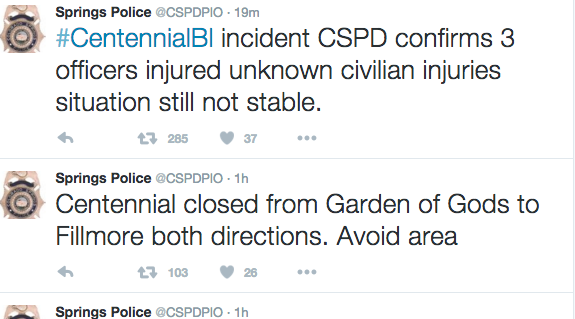 According to the New York Times, a local TV affiliate reported earlier today that the gunman was shooting at passing cars from the Planned Parenthood parking lot. Colorado Springs was recently the scene of a mass shooting on October 31, when three people were killed by a gunman before he died after a shootout with police.

This is a breaking story. Come back here for updates as news develops.