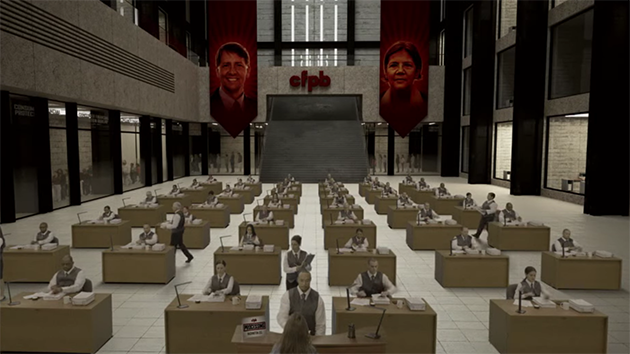 Screenshot from the ad

Liberal fans haven’t been able to persuade Sen. Elizabeth Warren to make a run for president, but she’ll appear at Tuesday night’s Republican presidential debate on Fox Business Network—during a commercial break. As Politico‘s Burgess Everett reports, the conservative American Action Network will run an ad opposing the Consumer Financial Protection Bureau, the consumer watchdog agency that Warren created following the financial crash. Per Everett, the group is spending half a million dollars to run the ad during the debate and later this week.

The commercial paints the CFPB as a Kremlin-like bureaucratic nightmare, with Warren as the Stalinesque figure barring regular Americans from collecting loans. Warren’s face is plastered on a giant red banner in the background, alongside that of CFPB director Richard Cordray. The Soviet imagery is not subtle.

“They call it CFPB,” the ad’s narrator ominously intones. “Washington’s latest regulatory agency, designed to interfere with your personal financial decisions: that car loan you needed, your mortgage, that personal loan. With the Consumer Financial Protection Bureau, those who need help the most are denied.”

The CFPB has been a frequent target of attacks from conservative organizations. But while those groups like to paint Warren’s brainchild as a scourge of consumers, the CFPB has fined banks for deceiving customers, fought predatory for-profit colleges, and simplified the mortgage application process.