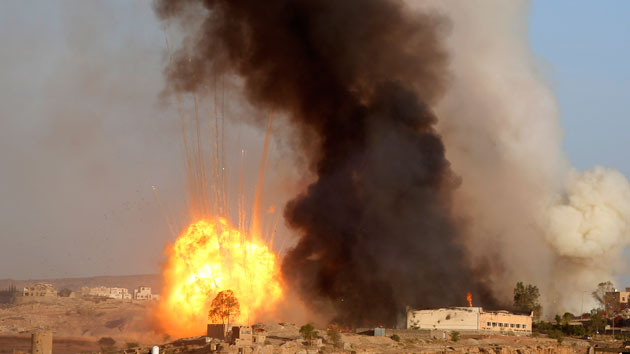 An airstrike by the Saudi-led coalition at a weapons depot in Sanaa, Yemen, on September 11, 2015.AP Photo/Hani Mohammed

This morning, Human Rights Watch called on the United States to stop selling bombs to Saudi Arabia for use in its air campaign in Yemen, which has killed hundreds of civilians and allegedly violated the laws of war.

The call comes shortly after a new arms deal was announced by the Defense Department, just days after the terrorist attacks in Paris. The $1.29 billion sale is for more than 10,000 advanced air-to-ground munitions, including laser guided bombs and “general purpose” bombs with guidance systems, which have been linked to civilian deaths in Yemen. The United Nations High Commissioner for Human Rights has reported that the eight-month fight against rebel fighters in Yemen has resulted in more than 2,300 civilian deaths, the majority of them from air strikes by the Saudi-led coalition.

“The US government is well aware of the Saudi-led coalition’s indiscriminate air attacks that have killed hundreds of civilians in Yemen since March,” said Joe Stork, Human Rights Watch’s deputy Middle East and North Africa director, in a statement. “Providing the Saudis with more bombs under these circumstances is a recipe for greater civilian deaths, for which the US will be partially responsible.”

Human Rights Watch noted that Pentagon officials have said the United States is playing an active role in coordinating the Saudi-led air operations in Yemen. This cooperation, it said, could make US forces “responsible for possible laws-of-war violations by the coalition.” Stork called on the United States to stop sending bombs to Saudi Arabia until the kingdom investigates the alleged war crimes by coalition warplanes.