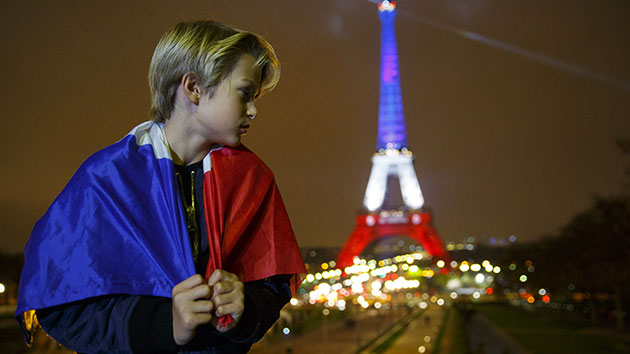 The Eiffel Tower is illuminated in red, white and blue in honor of the victims of the Paris terror attacks.Tolga Akmen/London News Pictures via Zuma Wire

Update, 11/16/15, 10:20 am: European authorities mounted more than 160 raids in France and Belgium on Monday, detaining at least 23 people. Among other suspects, French police are hunting Salah Abdesalam, a 26-year-old Belgian-born French citizen, who authorities believe took part in Friday’s attacks. Abdesalam’s brother, Brahim, was one of the suicide bombers who blew himself up during the attack.

On Sunday, French fighter planes bombed ISIS stronghold in Syria, Raqqa. In response to the air strikes, which were carried out with targeting information provided by the United States, the Islamic State warned in a new video that it would attack Washington. Speaking at the G-20 summit on Monday, President Obama ruled out putting troops on the ground in Syria to counter ISIS.

Update, 11/15/15, 9:45 am: A manhunt is underway for a possible eighth attacker who may have escaped following the the 3-hour siege of Paris on Friday night. Meanwhile, French authorities have taken seven people into custody, all of them the relatives of Ismaël Omar Mostefaï, the 29-year-old French citizen identified as one of the suicide bombers. Authorities say that another assailant, who also died in the attack, had a Syrian passport and entered Europe via Greece with the wave of migrants. According to the New York Times, at least 10 arrests have been made in Belgium in connection with the terrorist attacks.

Update, 11/14/15, 7:00 am: ISIS has taken credit for the attacks in Paris that killed at least 127 people, the New York Times reports. French President François Hollande has called the attacks “an act of war that was prepared, organized and planned from abroad, with complicity from the inside.”

Update, 11/14/15, 1:00 am: French officials say eight attackers have been killed, many by their own suicide devices. The Paris prosecutor’s office warns that some perpetrators could still be at large, according to the Associated Press. Earlier tonight, the White House released a summary of President Obama’s phone conversation with French President Francois Hollande:

Readout of the President’s Call with President Francois Hollande of France pic.twitter.com/heMyLyDV1n

Update, 11/13/15, 9:00 pm: The French cabinet released a statement laying out its powers under the state of emergency declared on Friday evening. In addition to reinstating border checks, the government “allow the arrest of any person whose activity is dangerous, the temporary closure of theaters and meeting rooms, the surrender of weapons and the ability to carry out administrative searches.” The government has also deployed 1,500 soldiers to aid police. The city of Paris had already announced that most public facilities will be closed tomorrow. Demonstrations and other street events are also suspended until further notice.

Update, 11/13/15, 8:47 pm: The AFP wire service has released a map of the alleged locations of all seven attacks that took place on Friday. Previously only four locations had been confirmed: the Stade de France, the Bataclan concert hall, the Les Halles shopping center, and the La Petite Cambodge restaurant.

Update, 11/13/15, 8:25 pm: Speaking at the Bataclan theater where more than 100 were killed tonight, President Hollande promised a “pitiless” response to Friday’s acts of terror. “We are going to lead a war,” he told reporters. No one has yet claimed responsibility for the attacks, and France’s BFMTV says some of the gunman are still on the loose.

Update, 11/13/15, 7:17 pm: The AFP wire service reports that around 100 people were killed at the Bataclan concert hall, according to police. That figure is in addition to those killed during other attacks around the city.

Update, 11/13/15, 6:58 pm: Police have told BFMTV, a French news channel, that the police raid on the Bataclan concert hall is over and two attackers were killed.

Update, 11/13/15, 6:42 pm: The AFP wire service and France24 confirm that French police have stormed the Bataclan concert hall where as many 100 people are being held hostage.

Update, 11/13/15, 6:36 pm: French officials have confirmed that attacks took place in at least seven locations throughout Paris. According to the Associated Press, police say at least two of those were suicide attacks.

A wave of terrorist attacks struck Paris on Friday night, killing at least 35 people and sowing panic around the French capital. French President Francois Hollande called the string of shootings and bombings that took place in at least three locations throughout the city “a night of terror.”

Hollande said on Friday evening that French authorities had called soldiers onto the streets to reinforce the police, and announced that France was declaring a state of emergency and reinstating border controls in order to prevent attackers from escaping the country. At the time of his speech, shortly before 6:00 pm Eastern time, he said that the attacks and security operations against them were still ongoing.

“Once again we’ve seen an outrageous attempt to terrorize innocent civilians,” said President Obama on Friday, offering his condolences to the French people and pledging the US’ full cooperation. “We stand prepared and ready to provide whatever assistance the government and people of France need to respond,” he said, saying the US would help “go after any terrorist networks that go after our people.”

Reports say at least one gunman opened fire at a restaurant called La Petite Cambodge, killing at least 35 people according to sources who spoke to the Associated Press. Another shooting took place at the Bataclan concert hall, where news reports from the BBC, CNN, and others say up to 100 people have been taken hostage by unidentified attackers.

Local media also reported a third shooting attack at the Les Halles shopping center in central Paris at around 5:35 Eastern time, more than an hour after the initial reports of shootings and bombings began.

Meanwhile, an explosion also occurred near the Stade de France, where the French national soccer team was playing against Germany. Hollande, who was attending the game, was evacuated according to French television station iTELE. The explosion could be heard clearly during the game, as captured by the live feed of the match.

This is a developing news story, and details will be added as they become available.