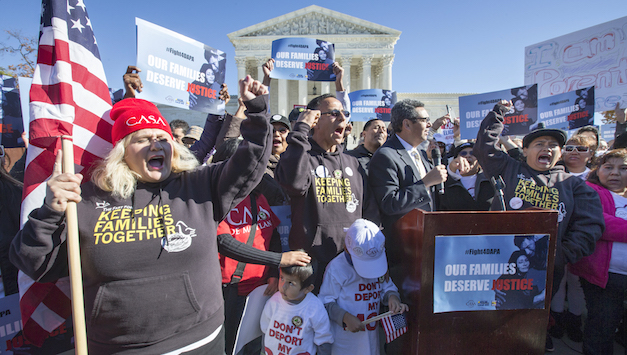 Supporters of Obama's executive action on immigration rally at the Supreme Court in Washington on November 15.J. Scott Applewhite/AP

The Obama administration asked the Supreme Court on Friday to take up a case that has stymied the president’s sweeping executive actions on immigration. President Obama’s executive orders, announced a year ago today, would have given temporary legal status to the undocumented parents of US citizens and expanded a program to protect immigrants who came to the United States illegally as children. Nearly 5 million undocumented immigrants would have been shielded from deportation.

Although the federal government is largely in control of immigration policy, Texas led 25 other states in opposing the measure, arguing that Obama’s executive actions overreached his authority and would force the states to provide services to the immigrants or modify their laws. They took their objections to court and the program has been suspended since February. The administration appealed the decision, but the Fifth Circuit Court of Appeals voted 2-1 earlier this month to uphold the earlier decision blocking the measure.

The lower court’s decision “will force millions of people…to continue to work off the books, without the option of lawful employment to provide for their families,” the Department of Justice wrote in its petition to the Supreme Court. “And it will place a cloud over the lives of hundreds of thousands of people who came to the United States as children, have lived here for years, and been accorded deferred action.”