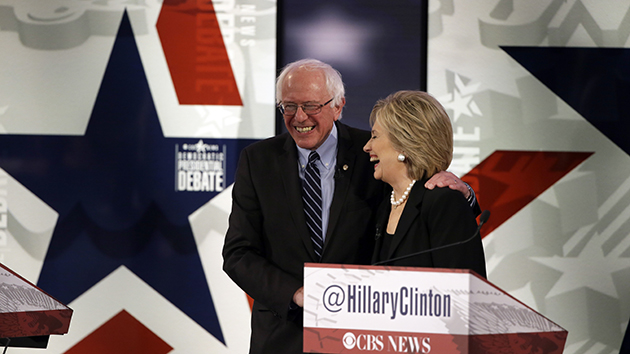 The three Democratic presidential candidates met for their second debate on Saturday evening in Des Moines, Iowa. Following the terrorist attacks in Paris on Friday night, the CBS News moderators scrambled to focus the first segment of the debate on terrorism and foreign policy—issues that gave former Secretary of State Hillary Clinton a chance to demonstrate her foreign affairs expertise.

Both Vermont Sen. Bernie Sanders and former Maryland Gov. Martin O’Malley have largely focused their campaigns on domestic policy—and both garnered significant applause from the audience when it came to these issues. Sanders’ attacks on Wall Street and the campaign finance system, and his call for a raising the minimum wage were met with big approval from the crowd. O’Malley hit several of those same notes, though his biggest applause line came when he called Donald Trump an “immigration-bashing carnival barker.”

Though the debate remained civil, Sanders and O’Malley did attack Clinton on several issues, including the donations she has received from Wall Street over the years. Her strategy for rebutting such attacks came into focus during the debate.

Here are some of the night’s top moments.

Sanders wants to spend $1 trillion on infrastructure, make public college free, and expand Social Security. If his plan is to raise taxes on the wealthiest Americans to pay for these investments, CBS’ Nancy Cordes asked him, how high would they be?

“We haven’t come up with an exact number yet, but it will not be as high as the number under Dwight D. Eisenhower, which was 90 percent,” Sanders promised. The crowd laughed almost nervously at the high number. But Sanders quickly reassured them.

“I’m not that much of a socialist compared to Eisenhower.” The audience roared.

Sanders takes off the gloves over Wall Street

Sanders has largely shied away from attacking Clinton, but he tore into her over donations she has received from Wall Street firms.

“Why, over her political career, has Wall Street been a major—the major campaign contributor to Hillary Clinton?” he asked. “You know, maybe they’re dumb and they don’t know what they’re going to get, but I don’t think so.”

Moderator John Dickerson prodded Sanders to explain this comment, so Sanders continued to question whether Clinton would actually take on Wall Street given her history taking donations from big banks.

“I have never heard a candidate, never, who has received huge amounts of money from oil, from coal, from Wall Street, from the military industrial complex, not one candidate say, oh, these campaign contributions will not influence me,” he said. “Well, why do they make millions of dollars of campaign contributions? They expect to get something. Everybody knows that.”

Clinton did not take Sanders’ Wall Street attack lying down. “He has basically used his answer to impugn my integrity,” she said, demanding time to respond.

“It’s fine for you to say what you’re going to say, but I looked very carefully at your proposal,” she said, referring to Sanders’ plan for reforming Wall Street. “Reinstating Glass-Steagall is a part of what very well could help, but it is nowhere near enough. My proposal is tougher, more effective, and more comprehensive because I go after all of Wall Street not just the big banks.”

Clinton also had a response ready for both Sanders’ and O’Malley’s calls to reinstate Glass-Steagall, the Depression Era-law that separated commercial and investment banking. “I have nothing against the passion that my two friends here have about reinstating Glass-Steagall,” she said. “I just don’t think it would get the job done.”

Clinton and Sanders on the minimum wage

Clinton, on the other hand, held firm on her $12 per hour proposal, which would ensure that raising the minimum wage doesn’t create unintended consequences such as job losses. And she hung her hat on Alan Krueger, an economist respected among liberals. “I do take what Alan Krueger said seriously. He is the foremost expert in our country on the minimum wage, and what its effects are…what Alan Krueger said in the piece you’re referring to is that if we went to $15, there are no international comparisons,” she said. “That is why I support a $12 national federal minimum wage.”

O’Malley took on Clinton for being fickle in her support of strong gun control measures, invoking the image of “Annie Oakley,” an attack line then-presidential candidate Barack Obama used against Clinton in the 2008 primary.

“But Secretary Clinton, you’ve been on three sides of this. When you ran in 2000 you said we needed federal robust regulations,” O’Malley said. “Then, in 2008, you were portraying yourself as Annie Oakley and saying we don’t need those regulations on the federal level and now you’re coming back around here. There’s a big difference between leading by polls and leading with principle.”

During the debate’s foreign policy discussion, Sanders noted that the invasion of Iraq—which Clinton voted for—destabilized the Middle East and “led to the rise of” ISIS. The point gets at one of Clinton’s major vulnerabilities. But the former secretary of state deployed her deep knowledge of foreign policy to deflect the attack and Sanders chose not to press the point further.

“I think we’ve got to understand the complexity of the world that we are facing and no place is more so than in the Middle East,” Clinton said, citing several destabilizing factors in the region.

“The Secretary’s obviously right,” Sanders said. “It is enormously complicated.”