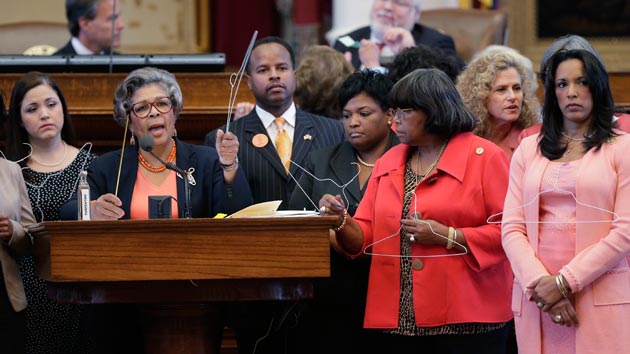 Ever since Texas passed HB2 in 2013, the omnibus abortion law at the heart of a pivotal case the Supreme Court will review early next year, more than half of the state’s 41 abortion clinics have been forced to close. As these closures have mounted, advocates in the state have worried that the decline in abortion access could lead to a rise in the number of women trying to terminate pregnancies by themselves.

A new study quantifies some of those fears: At least 100,000 Texas women—and as many as 240,000—between the ages of 18 and 49 have attempted to self-induce abortions, according to a report released today by the Texas Policy Evaluation Project (TxPEP). The study also found that it is possible that the rate of women attempting to self-induce abortions is rising in Texas as a result of the state’s additional restrictions on abortion care. The report points to previous studies that have explored the correlation between a rise in abortion restrictions and the prevalence of self-induced abortions. A 2008 national study found that about 2 percent of women reported that they tried to terminate pregnancies on their own. In 2012, a year after Texas passed several new abortion restrictions, a study of Texas women seeking care at an abortion clinic found that about 7 percent reported attempting to end their pregnancies without medical assistance before seeking clinic care.

“This is the latest body of evidence demonstrating the negative implications of laws like HB2 that pretend to protect women but in reality place them, and particularly women of color and economically disadvantaged women, at significant risk,” said Dr. Daniel Grossman, one of the study’s co-authors and a professor in the department of obstetrics, gynecology, and reproductive sciences at the University of California-San Francisco, in a press call Tuesday morning.

Amy Hagstrom Miller, the president and CEO of Whole Woman’s Health, an independent abortion provider in Texas and the lead plaintiff in the HB2 case currently before the Supreme Court, reiterated that Texas has seen a rise in self-induced abortions since abortion restrictions like HB2, and that terminating a pregnancy with DIY methods is not healthy for women. “Nobody should be denied safe and compassionate care based on her zip code,” said Hagstrom Miller. “But that’s exactly what’s been happening.

These findings come from a survey of nearly 800 women, ages 18 to 49, conducted by TxPEP over two months in 2014 and 2015. The women were asked if they knew or suspected that their best friend had ever self-induced an abortion, and if they’d ever done so themselves. Overall, 1.7 percent of respondents said they had tried to self-induce an abortion, while 4.1 percent of women said they knew or suspected their best friend had done so. Applying these proportions to the nearly 6 million women of reproductive age in Texas, the researchers concluded that an estimated 100,000 to 240,000 Texas women ages 18-49 have attempted to end a pregnancy alone.

The study identifies two populations where histories of self-induced abortion were most prevalent: Latina women living in a county that borders Mexico—a more rural area of the state that has seen several clinic closures—and women who reported difficulty gaining access to reproductive health care in the past.

The study also determined that the two broad categories of methods used by women to end their pregnancies were home remedies such as herbs, teas, vitamins, or medications—primarily misoprostol—obtained in Mexico without a prescription by women traveling there.

Typically, a medication abortion in the United States requires that two drugs—misoprostol and mifepristone—be taken about 24 hours apart. But most doctors say misoprostol alone can be an effective way to induce an abortion if the combined regimen is not available. Most of the women who reported obtaining misoprostol had a complete abortion after using the drug, but used different doses and methods of administration. Many reported intense symptoms throughout the abortion—intense cramping and bleeding, for instance—and some talked about being unsure whether these symptoms were normal or healthy.

Most women cited one or more of four reasons for choosing to self-induce: They lacked the money to travel and/or pay for the procedure; their local clinic had closed; a close friend or family member had recommended self-induction; or the women feared the stigma associated with going to an abortion clinic.

But Grossman pointed out that among these specific reasons, “a common layer was that poverty layered on one or more of these obstacles led women to self-induce.”