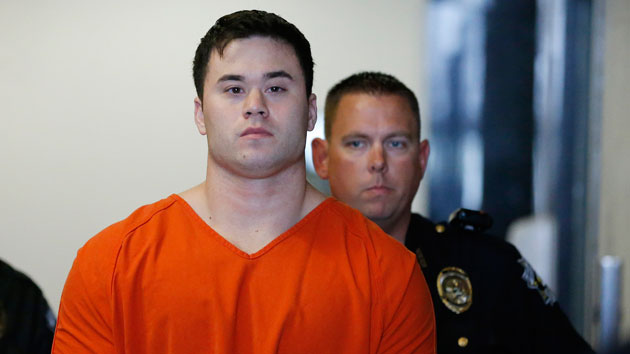 An Oklahoma police officer was found guilty of 18 counts of sexual assault against eight women in a case that largely escaped national media attention. He could be sentenced to up to 263 years in prison. Here’s what you need to know about the case.

The allegations: Daniel Holtzclaw, a 29-year-old former college football player, was accused of raping and sexually assaulting 13 women—at least 12 of them black—over a seven-month period in 2013 and 2014. All the attacks occurred in a predominantly black, low-income neighborhood in Oklahoma City that Holtzclaw regularly patrolled, police say. His victims ranged in age from 17 to 57 years old—the youngest was a high school student and the oldest a grandmother.

The women testified that Holtzclaw stopped them while they were walking or driving alone. He often forced his victims into his squad car and drove them to isolated areas such as empty lots, fields, or an abandoned school, according to court testimony. Some said Holtzclaw assaulted them in their homes while wearing his police uniform and with his department-issued gun holstered at his side. One woman, who testified that she was 17 years old at the time of the attack, told the jury that Holtzclaw used a drug search as a pretense to grope her. He later raped the teen on her mother’s front porch while she was home alone. Another—the grandmother—said Holtzclaw forced her to perform oral sex on him during a traffic stop. Holtzclaw was placed on administrative leave during the investigation and was eventually fired. He was arrested in August 2014 after investigators used GPS tracking devices to corroborate his accusers’ stories.

The charges: Holtzclaw was charged with 36 counts, including rape, forcible oral sodomy, burglary, stalking, and sexual battery. He pleaded not guilty to all of the allegations. He faces the possibility of spending multiple life sentences in prison.

The prosecution strategy: Prosecutors argued Holtzclaw deliberately selected his victims. They were almost all poor and black. (Holtzclaw’s father is white. His mother is Japanese.) Some were suspected or convicted of drug possession or prostitution, and others had active warrants. Holtzclaw thought they would be too afraid to report him or no one would believe them if they did, prosecutors argued in court. The officer often threatened victims with arrest and violence if they did not cooperate.

Some of his victims were hesitant to come forward. The youngest accuser asked while on the witness stand, “What’s the point of telling on the police?” Another testified that she never told anyone because she had “never been on the right side of the law.” Police began investigating the case only after the 57-year-old victim came forward. Prosecutors said she had no criminal record and thus no reason to fear going to the police. A middle-class woman, she was passing through the neighborhood where Holtzclaw stopped her but did not live there.

The defense: The defense argued that all the sexual acts were consensual. They argued that Holtzclaw is an upstanding, three-year veteran of the police force and an “all-American good guy.” According to media reports from the courtroom, the defense attempted to discredit Holtzclaw’s accusers by grilling them about their past drug use and criminal histories. Holtzclaw did not take the stand.

The jury: The jury included eight men and four women. All the jurors were white.

The verdict: The jury found Holtzclaw guilty on 18 counts involving eight of his accusers. The convictions included five counts of rape and several counts of sexual assault, such as  sexual battery and forcible oral sodomy.  The jury recommended a sentence of 263 years in prison. Holtzclaw will go before the judge for sentencing January 21. He faces multiple life sentences.

The public response: The conviction has the potential to influence the debate about how the police are held accountable for wrongdoing. The Associated Press reported in November that of nearly 1,000 officers accused of sexual assaults nationally over a six-year period, 550 officers were fired and only a small number were convicted.

Some activists within the Black Lives Matter movement have expressed frustration that Holtzclaw’s case did not get the same attention that is often given to black men who are killed by police officers. The hashtag #blackwomenmatter was used to call attention to the case on social media, though it got limited coverage from national media.

Local supporters of the victims, who came to the courthouse to watch testimony, say they were shocked at the beginning of the trial because prominent women’s groups were absent. Often, such organizations come to show support when women are victimized.

Protesters calling for Holtzclaw to be held accountable organized demonstrations outside the courthouse throughout the trial. Initially, civil rights activists were concerned about the racial make-up of the jury. All the jurors were white and 40 percent of city’s residents are minorities. In the end, activists were pleased with the verdict.

The Oklahoma City Police Department also said it was “satisfied” with the verdict in a Facebook post. Before the trial, Holtzclaw’s former boss called his crimes “the greatest abuse of police authority I have witnessed in my 37 years as a member of this agency.”