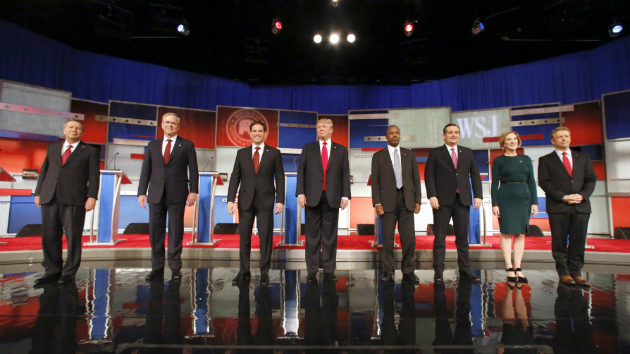 At CNBC’s Republican presidential debate in October, New Jersey Gov. Chris Christie lashed out at the moderators after they asked a question about whether daily fantasy sports—a growing and lucrative industry—should be considered a form of gambling and regulated by the government. “Are we really talking about getting the government involved in fantasy football?” he bellowed. “We have $19 trillion in debt, we have people out of work, we have ISIS and Al Qaeda attacking us, and we’re talking about fantasy football? Can we stop? How about this? How about we get the government to do what they’re supposed to be doing: secure our borders, protect our people and support American values and American families. Enough on fantasy football. People play, who cares?”

The rant garnered applause, but it’s likely that Christie won’t be engaging in similar theatrics tonight if the topic of online gambling comes up. That’s because GOP megadonor Sheldon Adelson will be sitting front and center at the debate, which will be held in the billionaire’s Las Vegas casino. A fierce opponent of online gambling, Adelson has said he will spend “whatever it takes” to ban it.

In 2012, Adelson and his wife, Miriam, spent at least $92 million backing Republican candidates, and they are widely expected channel the same amount into this election. But the Adelsons have yet to throw their weight behind a GOP contender—which means that what the candidates do or don’t say could be a deciding factor on whether they win the “Adelson primary.” Along with online gambling, the candidates will likely face questions on several other pet Adelson topics—drug legalization, for instance, which Adelson opposes but which several GOP candidates have said should be left up to each state.

In what was largely seen as a bid to curry favor with the billionaire, both Sens. Lindsey Graham and Marco Rubio have sponsored legislation to ban internet gambling. Rubio, who is rising in the polls, is a top contender for Adelson’s support. Graham, for his part, has received tens of thousands of dollars from Adelson and his family for his Senate campaign.

Christie faces a tougher road when it comes to ingratiating himself to Adleson. In 2013, Christie signed legislation legalizing online gambling. But Christie has also shown an eagerness to please Adelson, reportedly going so far as to visit the casino magnate’s office to personally apologize for referring to the West Bank as “occupied territories” in a public speech, a term that offended Adelson, who considers the Palestinian territories to rightfully belong to Israel. If confronted tonight with a question about online gambling, Christie may be in a tough spot, since the powerful casino interests in his state are all in favor of internet gaming.

If CNN’s moderators put him on the spot, Christie may just have to roll the dice and risk alienating someone.