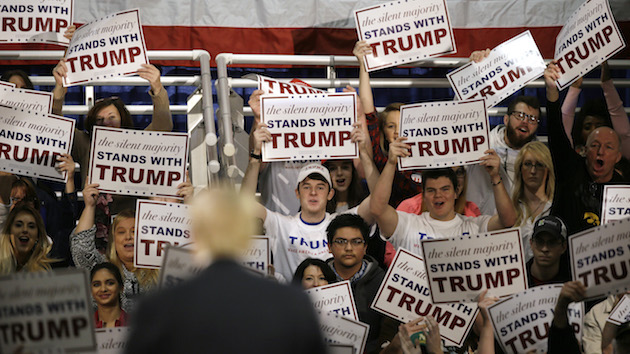 A week after proposing to ban all Muslims from entering the United States, Donald Trump has reached new heights in the polls.

The real estate tycoon has 41 percent nationally in the Republican presidential contest, according to a survey released Monday by Monmouth University—27 points ahead of the rest of the field. Ted Cruz comes in a distant second at 14 percent, followed by Marco Rubio at 10 percent and Ben Carson at 9 percent. No other candidate exceeds 3 percent.

Monmouth’s findings are based on interviews with 385 registered Republican or Republican-leaning voters, with a margin of error of plus or minus 5 percentage points.

Among that sample, 67 percent responded that they would feel either “enthusiastic” or “satisfied” if Trump became the GOP nominee, while 28 percent reported that they would be “dissatisfied” or “upset.” Trump is also enjoying his peak favorability among these voters: 61 percent have a favorable impression of him, 29 percent are unfavorable, and just 10 have no opinion.

While continuing to gain in nationwide polls, Trump’s only recent bad news comes out of Iowa, where Cruz, the tea-party-aligned senator from Texas, has recently gained on him and now holds a small lead over Trump in most recent polls.