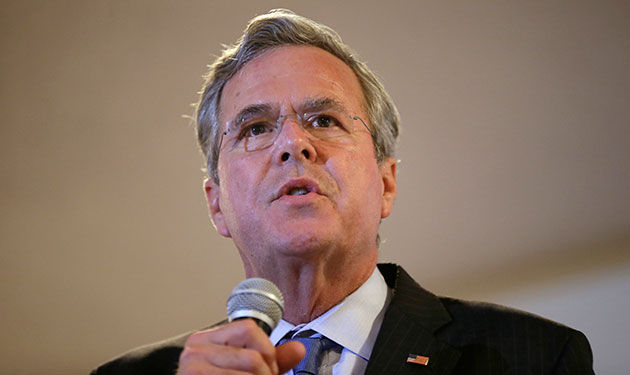 In February, a limited liability company called TH Holdings LLC donated $100,000 to Right to Rise, the super-PAC supporting Jeb Bush’s bid for the GOP presidential nomination. That’s not extraordinary; quite a few LLCs have donated to the super-PAC, which has so far raised more than $103 million. But TH Holdings is a special case—one that represents the worst-case scenario in the post-Citizens United campaign finance landscape: untraceable corporations shoveling untraceable cash into the political system. Beyond this six-figure contribution, the company appears to have no history of doing business anywhere. And its incorporation records reveal no owners, managers, or officers.

As far as the public record goes, this looks like a ghost company. So who is behind this contribution?

There are a few clues. In connection with its donation, TH Holdings listed an address in New York City that has also been used by Neuberger Berman, a private investment firm, to register some of its funds. Coincidentally or not, Neuberger Berman’s CEO is George Herbert Walker IV, Jeb Bush’s second cousin. And Bush himself is a partner in one of the firm’s private equity funds.

A Neuberger Berman spokesman confirmed that the address associated with the donation is Neuberger Berman’s, but said the LLC is not a Neuberger Berman entity. Walker, who made his own donation of $100,000 to Right to Rise several weeks before the TH Holdings contribution, told Mother Jones that he has no connection to the LLC.

TH Holdings isn’t the only mystery LLC funding the pro-Bush super-PAC. A few days after the TH Holdings contribution, Right to Rise received another curious donation. This time, an Alabama-based company called Heather Oaks LLC dumped $100,000 into the group. And Heather Oaks is even more ghostly than TH Holdings. According to Alabama records, the company hasn’t existed for more than 10 years. It was originally founded as the holding corporation for an apartment complex, but the property was sold in the early 2000s. According to the state of Alabama, the company was merged into another limited liability company in 2004. That LLC, according to Alabama records, was dissolved a week later. So how does an out-of-business firm come to contribute $100,000 to a political outfit?

“Our campaign finance system now has loopholes big enough to drive a truck through, and anonymous donors are taking full advantage,” says Richard Carbo, a spokesman for the group. “Donations through shell corporations are an easy way for these wealthy individuals to shield their identities and agendas from the public.”

Paul Lindsay, a spokesman for Right to Rise, declined to explain these two contributions, citing a policy of not discussing donors.

Since the Supreme Court’s Citizens United decision in 2010, corporations can legally donate unlimited amounts of money to a super-PAC. They don’t have to identify the original source of the money, but the name of the company contributing the cash must be disclosed. Although a corporation can give money to a super-PAC, federal law prohibits a donor from using another identity to make a contribution.

“If there is a human behind Heather Oaks LLC, and that human simply routed $100,000 through Heather Oaks to Right to Rise, because the human didn’t want his identity known, that’s illegal,” says Paul Ryan, deputy executive director of the Campaign Legal Center. “But if it’s sitting on real estate or other assets or cash—$100,000 or more in cash—and the directors of this LLC decided they want to support Right to Rise, that’s not necessarily illegal.”

Both Heather Oaks and TH Holdings appear to be classic shell companies—business entities that often have no assets or business operations of their own and exist solely as a conduit for transactions by other companies or individuals.

The people or person behind TH Holdings provided scant information when they incorporated the LLC in New York on June 9, 2010. They listed no registered agent and no information about the number or value of shares in the company. The forms did include a mailing address, which belongs to the office of Paul Freedman, a Manhattan accountant. Freedman did not respond to a request for comment.

When it recently donated Right to Rise, Heather Oaks listed an address that corresponds to a shopping mall in Birmingham, Alabama. But the address does not specify a particular shop or office at the mall. A spokesman for Bayer Properties, the mall’s owner, says the company has no information about the donation or Heather Oaks. “We are neither familiar with this donation nor do we know where it originated,” he says. “The address is on a property we own and manage; however, there are many tenants from which the donation may or may not have originated.”

The cases of TH Holdings and Heather Oaks bear some similarities to a handful of mysterious donations made during the last presidential election cycle to the pro-Mitt Romney super-PAC, Restore Our Future. For example, in 2011, a shell corporation called W Spann LLC was founded, donated $1 million to Restore Our Future, and then dissolved, without ever showing any sign of business activity. Several watchdog groups, including the Campaign Legal Center, filed complaints with the Federal Election Commission and the Department of Justice. Following the public scrutiny, the true donor, a former Bain Capital executive, came forward and acknowledged making the donation.

Election watchdogs, including Ryan’s Campaign Legal Center, also filed complaints in 2011 against two other shadowy corporations, F8 LLC and Eli Publishing, that donated to the Romney super-PAC. Eventually, both companies were traced to the founder of the Utah-based multilevel marketing firm Nu-Skin. More than five years later, the complaints against W Spann, F8 LLC, and Eli Publishing have yet to be resolved. As of this summer, all three complaints appeared to still be pending before the FEC.