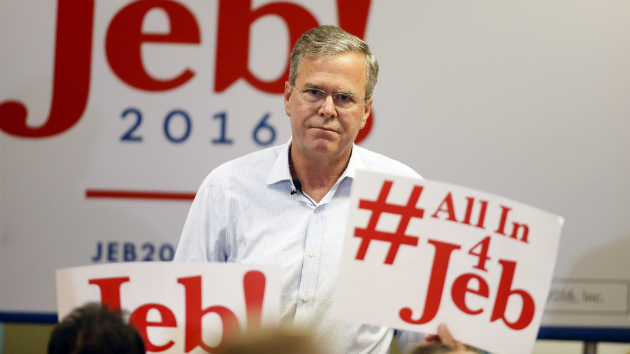 Perfect last-minute Christmas present for the low-energy person in your life who needs an extra exclamation point: Jeb!

Not the candidate, just his name—upbeat punctuation mark and all. The word has apparently lost its appeal. Even to the candidate.

Last winter, months before Jeb Bush announced he was running for president, a Miami intellectual property attorney filed a trademark request for the word “Jeb!” on behalf of a mysterious Delaware corporation called BHAG LLC. As we discovered this summer, BHAG was an acronym for Big Hairy Audacious Goal. This phrase came from one of Bush’s favorite business management books, and when he was governor he used this term to motivate his underlings. It wasn’t until Bush, as a declared candidate, filed his financial disclosure form in July that the world learned he directly owned BHAG.

One of BHAG’s few activities was to trademark “Jeb!” As is par for the course, the US Patent and Trademark Office accepted the submission and requested additional information before it would grant the trademark. But according to that office, on November 9 Bush’s application was officially abandoned. Technically, Bush has until January 9 to restart the process, but for now the name is not trademarked and open for anyone else to try to grab.

According to the original application, Bush wanted the name reserved for use on leather key chains, stadium cushions, stemware, stuffed toys, hair bands, and other cool stuff. In April, the USPTO asked BHAG to provide, within six months, written consent from Bush himself to use his name. Bush never responded. So the USPTO issued an abandonment notice regarding the trademark request.

Bush’s campaign did not respond to a request for comment.

To be fair, Bush has had many other things to worry about these past few months. But his chief antagonist, Donald Trump, did find the time to re-up his hold on “Trump,” and he added a trademark claim to cover the use of his name for books on how to succeed in business and politics.