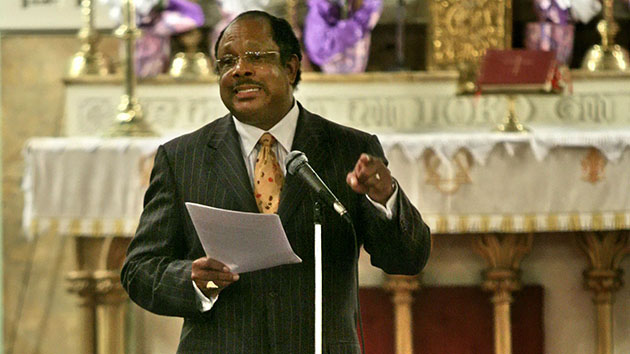 On Monday, Republican front-runner Donald Trump met with a group of African American pastors in Manhattan, after some confusion over whether all the participants would be endorsing him. Some black pastors who weren’t there were critical of the meeting—one referred to it as a “get-played moment”—but Trump insisted (of course) that the session went well. He also claimed that some of the participants did agree to endorse him.

Trump, who has made some unsavory statements about the black community, may not be a likely candidate for such endorsements. So who might these Trump-friendly pastors be? Meet Pastor James David Manning of the ATLAH World Missionary Church in Harlem.

This is James David Manning. The black pastor that endorsed trump. The sign should tell u all u need to know. pic.twitter.com/llqszE5WW8

Manning, who was at Trump’s summit, has a long record of outlandish, hateful, and nutty statements. His church once accused President Barack Obama of releasing “the homo demons on the black man.” He has vowed to die if that’s what it takes to expose Obama as the devil. He has asserted that Starbucks injects semen from gay men into its coffee. (Yes, really.) He chanted “oh faggots, oh faggots, please come out tonight” during a protest at his church last week.

As a bonus, here’s a video on Manning’s Facebook page of a man who claims that Planned Parenthood, and not Robert Dear (who is accused of killing three people at a Planned Parenthood clinic), practices terrorism every day.

On this Facebook page, Manning (proudly?) posted a news story reporting that “Harlem Hate Pastor James David Manning” was at the Trump meeting. It’s unclear whether Manning was one of the pastors who Trump says has agreed to endorse him. But there is evidence that Manning, who’s no stranger to extreme rhetoric, sure likes the GOP candidate whom Sen. Lindsey Graham (R-S.C.) recently called “a xenophobic, race-baiting, religious bigot.”