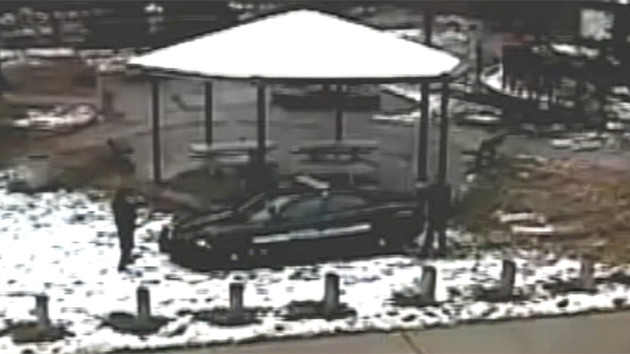 A still from surveillance footage of the shooting.

The grand jury investigating the fatal shooting of 12-year-old Tamir Rice by Cleveland police last fall is “now very near a decision” on whether to recommend criminal charges against the shooter, according to a lawyer for one of the two officers involved.

Officer Timothy Loehmann, who shot and killed Rice within two seconds of arriving on the scene (a Cleveland park) is the sole subject of the criminal investigation and grand jury proceedings—although three outside reviews of the case have stated that the actions of Officer Frank Garmback, who pulled the officers’ cruiser to within a few feet of the boy, warrant a criminal investigation as well.

On Tuesday, after a year of silence, the two officers released their own accounts of the shooting, which took place last November 22 and was captured in surveillance footage. Loehmann and Garmback had remained tight-lipped despite multiple interview requests from county sheriff’s investigators and subpoenas from the grand jury. With a grand jury decision imminent, it was “time for us to present our statement to the Sheriff, if we were going to do so,” Michael Maloney, Garmback’s attorney, told Mother Jones in an email. (The prosecutor’s office would not discuss the grand jury’s timetable, and Loehmann’s attorney has not responded to requests for comment.)

“I kept my eyes on the suspect the entire time,” Loehmann wrote in his letter, adding that he and Garmback thought Rice was going to run toward a nearby community center. “I was fixed on his waistband and hand area. I was trained to keep my eyes on his hands because ‘hands may kill.'” Loehmann wrote that he saw Rice pull out a gun, and that he then fired twice toward Rice’s hands. One of those shots struck the child in the abdomen—he died at a hospital the next day.

Garmback, in a separate letter, wrote that he first saw Rice had a gun “about the time Ptl. Loehmann exited the cruiser. The male was pulling it from the right front area of his waistband. I thought the gun was real.” In June, the county sheriff’s five-month investigation revealed that the 911 dispatcher had failed to relay the caller’s description that Rice was “probably a juvenile” and that his gun was “probably fake.” Indeed, it was a toy replica.

The officers’ statements, which attorneys for Rice’s family called “self-serving” and “inconsistent,” left key questions unresolved. The accounts were “flatly contradicted by the objective video footage,” the family lawyers wrote in their own statement on Tuesday. “Hopefully, the grand jury will see through this.”

“The bottom line is that you don’t come barreling in. You follow him if he runs. You don’t get up close.”

Loehmann and Garmback, for instance, claimed Rice was heading toward the recreation center before he turned toward the squad car as it pulled up. But that’s not apparent in the surveillance video. Loehmann also wrote that he and Garmback issued multiple warnings for Rice to show his hands as the cruiser pulled up, and as Loehmann was getting out. Garmback, however, wrote that the car windows may have been rolled up.

The officers’ statements revealed troubling tactical errors, according to Dave Klinger, a former cop and a criminologist at the University of Missouri-St. Louis. For one, Loehmann described the scene as “an active shooter situation.” That’s inaccurate, Klinger explains. “An active shooter is what happened in San Bernardino—someone who is actively shooting at people. So right off the bat something is not right. There’s so much we don’t know about what was going on in this guy’s mind and the mind of his partner officer.”

The biggest tactical blunder, Klinger says, was in Garmback’s pulling the vehicle so close to Rice. Garmback wrote that “the cruiser did slide when I applied the brakes. I am not sure how far. The car did not stop where and when I intended.” Even so, Klinger says, “the bottom line is that you don’t come barreling in. You follow him if he runs. You don’t get up close. That doesn’t make any sense.”

Klinger, who has testified as an expert witness in police-shooting cases, adds that the verbal warning Loehmann and Garmback said they issued—”show me your hands”—was a “brain-dead” move. “It’s not a warning, it’s a command,” Klinger says. “And it’s the wrong command to issue when someone has their hands not in plain view in that moment. I do not understand why police officers are sometimes trained that ‘show me your hands’ is an appropriate thing to do when somebody who you believe had a gun has their hands not in plain view.”

Neither officer explained in his letter why he neglected to administer first aid or tend to the child’s wound—even after the scene was secured.

Neither officer explained in his letter why he neglected to administer first aid or tend to the child’s wound—even after the scene was secured. Earlier this year, Cleveland police sergeant Janell Rutherford told investigators that the city’s police vehicles are not equipped with first-aid kits, and that Cleveland officers receive no medical training at the academy, except for CPR.

The officers’ statements are the latest pieces of evidence made public by county prosecutor Timothy McGinty. Beginning in October, McGinty released three reports from current and former law enforcement officials he’d tapped for that purpose. The reports unanimously concluded that Loehmann and Garmback had acted reasonably under the law, and that any tactical errors they may have made did not warrant criminal charges. In releasing those reports, McGinty broke with a longstanding tradition of keeping grand jury documents off limits to the public, raising suspicions about his motives. Rice’s family and supporters have called for a special prosecutor to take over the case.

Klinger, the former cop, says the officers’ tactical errors don’t rise to the level of criminal offenses, although they may facilitate a settlement in a wrongful death suit the Rice family has filed against the city. But two expert reports released last week by the family’s lawyers call the officers’ actions “reckless” and legally unjustifiable. Those findings were echoed in June by the Cleveland judge who found probable cause to charge the officers, but left the decision to the county prosecutor.