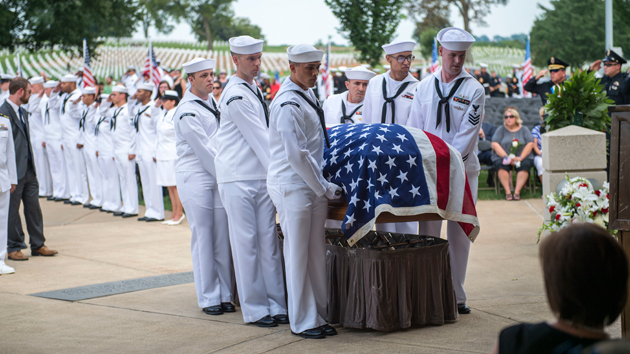 The latest American war vet to come home and die in a gun rampage was in Colorado Springs. After being shot by the Planned Parenthood attacker last Friday in the parking lot outside the women’s health clinic, Iraq War veteran Ke’Arre Stewart, 29, ran inside during his last moments alive to warn others to take cover. “I believe that’s his military instinct,” Stewart’s brother told NBC News. “You know: Leave no soldier behind, leave no civilian behind, just leave no one behind.”

“He went someplace where people expect to die, only to come back…and be killed,” Amburh Butler, a longtime friend of Stewart’s, told the Associated Press.

“That was a damned shame…a young man that served three tours of duty in Iraq, and then got shot riding his bicycle down the street. Doesn’t add up, does it?”

Stewart was one of three people killed in the Planned Parenthood attack, which left nine others injured. According to news accounts and Mother Jones‘ mass shootings database, Stewart is the latest among at least 32 former or active-duty service members—some of them highly decorated—who were injured or killed in gun rampages going back to the Aurora movie theater massacre in July 2012.

Fifteen of those 32 service members were shot fatally. While the tragic rate of suicide among war vets is better known, these deaths carry a distinct poignancy: The majority of these victims survived war zones, but not the quieter domestic settings to which they returned.

Here are details on their backgrounds and the rampages that took their lives:

Colorado Springs Planned Parenthood shooting; November 27, 2015
The shooting at Planned Parenthood was the second gun rampage to occur in Colorado Springs in less than a month. Stewart had enlisted in the Army after his high school graduation in 2004 and was deployed to Iraq with the 4th Infantry Division. From the war zone, he would send letters home describing the horrors he witnessed on the front lines. 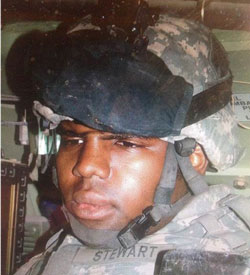 Downtown Colorado Springs shooting spree; October 31, 2015
Andrew Alan Myers, a 35-year-old father of two and an Iraq War vet, was out for a bike ride when he was gunned down in a shooting spree that also took the lives of two women who were nearby. Samuel F. Myers, the Army veteran’s grandfather, told the Gazette, “That was a damned shame. There’s a boy, a young man that served three tours of duty in Iraq, and then came home and got shot riding his bicycle down the street. Doesn’t add up, does it?”

Gun rampage in Inglis, Florida; October 1, 2015
On October 1, 68-year-old Walter Scott Terhune was one of three who died in what began as a domestic homicide. Described as a Good Samaritan “who was just trying to help,” Terhune was also a “decorated war veteran,” according to Fox 13 News. 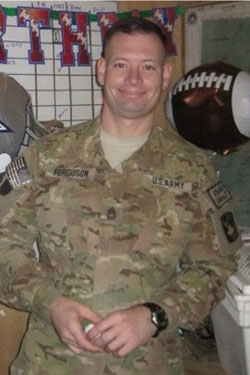 Umpqua Community College massacre in Oregon; October 1, 2015
Iraq War veteran Chris Mintz was shot seven times trying to prevent a gunman from entering a classroom at Umpqua Community College in southern Oregon, possibly saving the lives of many from an attack that eventually left 10 dead, including the shooter. After seven hours of surgery and significant blood loss, Mintz survived. He later detailed his account of the events in a Facebook post.

Mass Shooting at military recruitment centers in Tennessee; July 16, 2015
After a gunman unleashed a barrage of gunfire at two military recruitment centers in Chattanooga, Tennessee, a police officer and military recruiter were injured, and four Marines and one Navy petty officer were left dead. They were Gunnery Sgt. Thomas Sullivan, Staff Sgt. David Wyatt, Sgt. Carson Holmquist, Lance Cpl. Squire “Skip” Wells, and Navy Petty Officer 2nd Class Randall Smith. Sullivan, 40, had two purple hearts in his nearly 18 years as a Marine. Wyatt had done two tours in Iraq and one in Afghanistan in his decade-plus military career. Holmquist served two tours in Afghanistan after joining up in 2009. Skip Wells, 21, was a reserve lance corporal waiting to go on active duty. Smith, 26, who was married with three daughters, succumbed to his wounds three days after the rampage.

“Ferguson, who had just returned from Afghanistan, died trying to keep the gunman out of a room filled with military personnel.”

The second Fort Hood mass shooting; April 2, 2014
In the second mass shooting at Fort Hood military base in Texas in a five-year span, three service members died and another 16 were injured. Sgt. 1st Class Danny Ferguson, 39, who had just returned from Afghanistan, died trying to keep the gunman out of a room filled with military personnel. Before being killed at Fort Hood, Sgt. Timothy Owens, 37, had served in Iraq and Kuwait, compiling a large collection of medals, including two Good Conduct Medals, three Army Commendation Medals, four Army Achievement Medals, and the Combat Action Badge. Thirty-eight-year-old Staff Sgt. Carlos Alberto Lazaney Rodriguez had been deployed to both Iraq and Kuwait in his nearly 20 years in the army.

Washington Navy Yard mass shooting; September 16, 2013
Of the 12 murdered in the early-morning mass shooting at the military installation in Washington, DC, two were veterans: Martin Bodrog, 54, served 22 years after graduating from the Naval Academy in 1981. Gerald Read, 58, was a former Army lieutenant with two master’s degrees and spent much of his career in military law enforcement; at the Navy Yard, he worked as a civilian on data security. 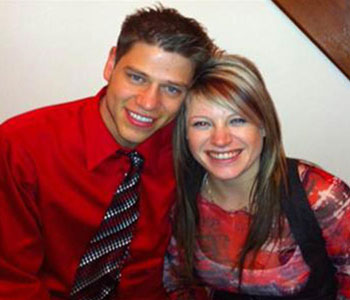 Pinewood Village Apartments rampage in Washington state; April 21, 2013
Four died in the Pinewood Village Apartments in Federal Way, Washington, when a domestic homicide turned into a gun rampage. One of the victims was Roland Scobee, a 62-year-old war veteran who was found dead inside his apartment after the attacker forced Scobee’s door open with a shotgun blast. Scobee was attempting to call 911, leading the police to believe that the attacker was attempting to kill witnesses.

Movie theater massacre in Aurora, Colorado; July 20, 2012
Jonathan Blunk, a 26-year-old Navy veteran, was among the casualties in the mass shooting that left 12 dead and 58 wounded at a movie theater in the Denver suburb. The father of two, who allegedly threw himself in front of his girlfriend to protect her, had served three tours in the Persian Gulf and North Arabian Sea, and hoped to reenlist to become a Navy SEAL.