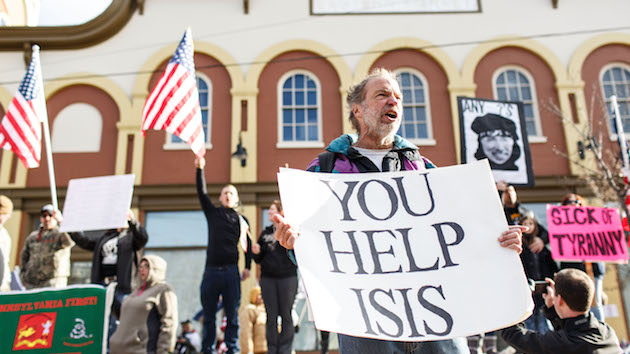 Republican politicians have restarted their push to stop Syrian refugees from entering the United States after the FBI announced on Thursday that it had arrested two Iraqi refugees on charges of providing material support to ISIS.

“The arrests of these men present a stark warning about the deficiencies of our programs for accepting refugees from Iraq and Syria,” Rep. Devin Nunes (R-Calif.), the chairman of the House Intelligence Committee, said in a statement on Friday. “Continuing these programs in their current form poses unacceptable risks to our national security that are growing more acute by the day.”

The House passed a bill called the American SAFE Act in November after the terrorist attacks in Paris stoked fears that terrorists were trying to infiltrate the United States by posing as refugees. The legislation would temporarily halt all Syrian refugee resettlement, and within the current refugee vetting process it would require the FBI director, the Homeland Security secretary, and the director of national intelligence to all personally sign off that each admitted Syrian posed no security risk.

The SAFE Act passed the House with a veto-proof majority but stood little chance of making it through the Senate. Now House Republicans are using Thursday’s announcement of terrorism arrests to pressure the Senate to take it up. Rep. Michael McCaul (R-Texas), the House Homeland Security Committee chairman and a co-sponsor of the SAFE Act, demanded on Friday that the Senate pass the bill as well. “We cannot delay while more potential jihadists slip through the cracks,” he said in a statement. “Terrorist groups like ISIS have vowed to use these programs to infiltrate the West, and now it is clearer than ever that we should take them at their word.”

Critics of the legislation, including President Barack Obama, the Democratic congressional leadership, and refugee resettlement groups, have called the SAFE Act an unnecessary addition to an already lengthy and secure vetting process—and one that would make refugee admissions all but impossible. The White House and refugee groups argued in November that Syrians undergo the most thorough screening of anyone who enters the United States. “These are not just random people showing up who we don’t know who they are,” said Matthew Soerens, who works on refugee resettlement for World Relief, one of the nine groups that helps place refugees in the United States. “These are people we know all sorts of details about, who’ve been individually interviewed, vetted, before they come to the United States.”

The two terrorism suspects whose arrests were announced by the FBI are both from Iraq; one entered the United States in 2009 and the other in 2012. More than 130,000 Iraqis refugees have resettled in the United States since 2007, and administration officials have acknowledged that the vetting of Iraqi refugees was not as strong as the current system. FBI director James Comey told the House Judiciary Committee in October that Iraqis had undergone “less-then-excellent vetting,” but said that the government has “improved dramatically our ability as an interagency—all parts of the US government—to query and check people.” Senior administration officials who work on refugee resettlement echoed that statement during a conference call with reporters in November. “I would say that with the Syrian program, we’ve benefited from our years of experience in vetting Iraqi refugee applicants,” said one official. “The partnerships we have today and the security checks we have today really are more robust.”

Speaking to reporters on Friday, McCaul said the administration must put in place a “proper vetting system” before more Syrians are admitted to the United States, but he did not provide details on what steps would be required to fix the current system. McCaul’s office could not immediately respond to questions from Mother Jones about what a sufficient vetting process would entail.