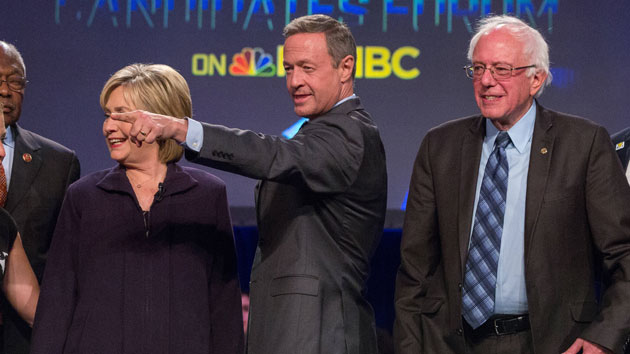 It’s the Sunday night of a three-day holiday weekend, which can only mean one thing: the three remaining Democratic presidential candidates are having a debate. With the Iowa caucuses less than a month away and Vermont senator Bernie Sanders leading in some early-state polls,  former Secretary of State Hillary Clinton and Sanders have increasingly turned their fire on each other, fighting over past votes and current positions on universal health care and gun control. Why stop now? We at the Mother Jones‘ politics desk have put together a by-no-means-comprehensive list of questions we’d put to the candidates if we were on stage:

* In 2005 you voted to give immunity to gun makers from lawsuits. But the next day you voted against giving immunity to companies in the fast food industry, like McDonald’s. Why exempt guns but not Big Macs?

* Your home state of Vermont adopted a single-payer health care system in 2011. But last year the state scrapped the plan citing rising costs. Now you’re proposing single-payer for the nation. What went wrong in Vermont and how would you have fixed it?

* You’ve promised to reduce America’s prison population by more than 500,000 people by the end of your first term. But more than 90 percent of America’s 2.2 million inmates are in state and local facilities. What can a president do about them?

* You’ve said that the United States should take a backseat in the battle against ISIS, and instead leave the fighting to a coalition of Muslim nations including Iran and Saudi Arabia. In light of the most recent dust-up between the two countries and their deep political and religious differences, how will you get two nations that hate each other to take up arms together?

* Even with a Democratic super-majority in the Senate, President Obama struggled to deliver incremental change in Washington, ultimately accepting stripped-down versions of the Affordable Care Act and the Stimulus. How do you expect to push through an even more ambitious health-care proposal in a Republican-controlled Congress still trying to repeal Obamacare?

* A supporter of yours, Chicago mayor Rahm Emanuel, reportedly worked to suppress a video of the killing of Laquan McDonald by Chicago police until after his re-election, and even used public funds to pay the victim’s family to keep quiet. Sen. Sanders has said that “any elected official with knowledge that the tape was being suppressed or improperly withheld should resign.” Should Mayor Emanuel resign?

* In October you said the Australian model of compulsory gun buy-backs “is worth looking at.” Have you looked at it? And would you entertain the idea of a compulsory gun re-purchase in the United States?

* Colorado residents will vote next fall on a ballot initiative on whether or not to institute a single-payer health care system. If you lived in Colorado, would you vote to approve that measure?

* You’ve pledged to not raise taxes on anyone making less than $250,000 per year, and criticized your opponents for proposing to raise taxes on people you’ve termed middle class. What is your actual definition of middle class? Why include a household making $150,000—the top 10 percent for annual income—in the middle class?

* In 2005, you went to war against violence in video games, introducing legislation to restrict sales of games. You said: “We need to treat violent video games the way we treat tobacco, alcohol, and pornography.” Do you still hold that view?

* David Brock, the head of a super-PAC that’s supporting your candidacy, made news yesterday for a report suggesting he’d demand Bernie Sanders release his medical records. Brock’s group, Correct the Record, has said it is coordinating with the campaign thanks to a special exemption in federal election law. Why is a candidate who has pledged to repeal Citizens United using a legal loophole to openly coordinate with a super-PAC?

* The Atlantic‘s Ta-Nehisi Coates argued in 2014 that African-Americans deprived of wealth through decades of federal housing discrimination should be able to apply for reparations from the government—similar to the program offered to Japanese-Americans who lost their homes and businesses during internment. Would you consider such a program if elected? And if not, what will you do to alleviate the lingering damages caused by formal government discrimination in the housing market?

* A recent poll found that 52 percent of Americans believe genetically-modified food to be “unsafe.” Are they right?

* The Obama administration is currently reviewing a proposed rule to expand overtime to most workers who earn less than $50,000 a year. Is that number too high, or too low?

* Over the last half decade pro-life groups have fundamentally re-written abortion laws at the state level, resulting in shuttered women’s health clinics and forcing women to crisscross state lines to get an abortion. Aside from appointing more pro-choice Supreme Court judges, what can a president do to reverse these setbacks at the state level and insure the right to an abortion established by Roe?

* Two years ago, Harry Reid and Senate Democrats used the so-called “nuclear option” to remove the filibuster for judicial nominees. Should the filibuster still exist for legislation and Supreme Court nominees, or should it be wiped out entirely?