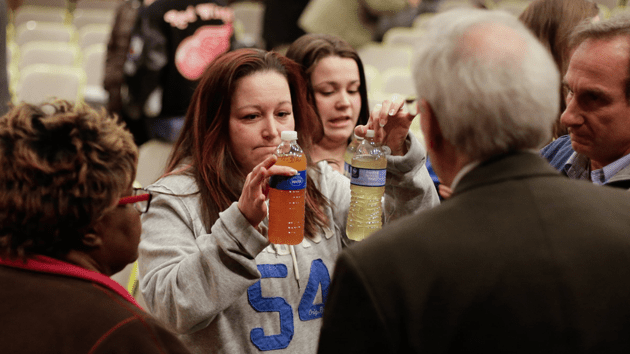 Update (2/2/2016): Darnell Earley announced plans to step down as emergency manager of Detroit Public Schools, saying the “initiatives implemented over the past year were completed ahead of my 18-month schedule.” Gov. Rick Snyder plans to appoint a transition leader by the end of the month.

Michigan is having a rough year, to put it mildly. Flint is reeling from the news that its water supply was contaminated with lead for 17 months. In Detroit, teacher “sick-outs” have been shutting down schools; 88 of the city’s 104 schools were closed on January 21. These two seemingly unrelated episodes are joined by a common policy: Both Detroit’s school system and Flint’s water system have been under the control of emergency managers, unelected officials who are empowered to make sweeping decisions and override local policies in the name of balancing budgets.

What’s an emergency manager? Michigan Gov. Rick Snyder was elected in 2010 on a platform of fiscal austerity. Snyder, the former head of Gateway computers and a darling of the American Legislative Exchange Council and the Koch-funded Americans for Prosperity, promised to run the state like a company, complete with “outcomes” and “deliverables.” In 2011, he introduced a signature piece of legislation, Public Act 4, which expanded the state’s authority to take over financially troubled cities and school districts. Similar laws exist in about 20 states, but Michigan’s is the most expansive: Emergency managers picked by the governor have the power to renegotiate or cancel city contracts, unilaterally draft policy, privatize public services, sell off city property, and even fire elected officials.

Since 2011, 17 municipalities or school districts in Michigan have been assigned emergency managers. The majority of them are in poor, predominantly African-American communities that have been hit hard by depressed economies and shrinking populations. Some EMs have worked with communities to generate local buy-in, but their outsider status, lack of accountability, and propensity for cutting public services to save money have generated harsh criticism. As Michael Steinberg, the legal director for the Michigan chapter of the American Civil Liberties Union, said a recent statement, “Flint is Exhibit A for what happens when a state suspends democracy and installs unaccountable bean counters to run a city.”

So what does this have to do with Flint? Flint was one of the the first cities to be assigned an emergency manager, in 2011; it would have four EMs in as many years. In 2013, its city council voted to build a pipeline to Lake Huron that would free the city of its dependence on Detroit’s water system by 2017. Ed Kurtz, the then-emergency manager, signed off on the plan, and the question became where Flint would source its water in the intervening years. According to a recent Daily Beast investigation, Kurtz rejected the idea of using Flint River water based on conversations with Michigan’s Department of Environmental Quality. Longtime Flint residents were also skeptical of the idea: General Motors, which calls Flint home, had used the river as a dumping ground for years.

Yet in 2014, under emergency manager Darnell Earley, the city switched water sources to the Flint River. It remains unclear what led authorities to believe that Flint River water was safe to drink; Earley maintains the decision was supported in a vote by the city council, though there is no record of such a vote. Howard Croft, the former director of public works for Flint, told the ACLU that the decision was financial, had been reviewed by state authorities, and went “all the way to the governor’s office.”

In March of 2015, after months of residents reporting unusual health symptoms and foul-smelling, tainted water coming from their taps, the Flint City Council voted to “do all things necessary” to switch back to Detroit’s water system. Then-acting emergency manager Jerry Ambrose nixed the vote, calling it “incomprehensible.”

And what about Detroit? For the past few weeks, Detroit teachers have been protesting with coordinated sick days that have caused dozens of temporary school closures. The sick-outs, the teachers say, are in response to disgraceful school conditions, from black mold and dead rodents in classrooms to class sizes of more than 40 students.

The Detroit Public School system has been under the authority of an emergency manager since 2009, when the beleaguered system of roughly 100,000 students was mired in debt. Today, after six years under four emergency managers, the number of students has shrunk by about 50 percent while the system’s debt has ballooned to $515 million. It risks going bankrupt by April. Over the past five years, every public school employee has taken a 10 percent wage cut.

Crumbling #DPS schools are a direct result of damage that can be done by unelected emergency managers. #MISOTS16

Governor Snyder’s latest pick for DPS emergency manager was Darnell Earley, the same official who oversaw Flint’s transition to corrosive river water. On January 21, the day 88 schools were shut down, the school system filed a restraining order against the protesting teachers meant to stop them from calling in sick. The motion was denied. On January 23, Earley posted new rules requiring teachers to submit a written report to him if they learn about their fellow employees organizing a strike. “Failure to immediately comply with this order may be grounds for discipline up to and including termination,” the rules read. Earley’s office did not respond to requests for comment.

What’s next for Michigan’s emergency managers?

There are currently no Michigan cities with emergency managers, though three school districts still them. But they remain unpopular with many Michiganders. Democratic legislators say they will introduce a bill to repeal the EM law. Voters already overturned the EM law in a November 2012 referendum, but a month later, the Republican-led state legislature passed a nearly identical law attached to an appropriations bill that is immune to voter referendum.

“Appointing an emergency manager is the last thing I ever want to do,” wrote Snyder in a 2012 blog post entitled “Why Michigan Needs Its Emergency Manager Law,” written just before the voter referendum. “But if worse comes to worse, the state has a responsibility to protect the health, welfare and safety of its citizens. We can’t stand by and watch schools fail, water shut off, or police protection disappear.”