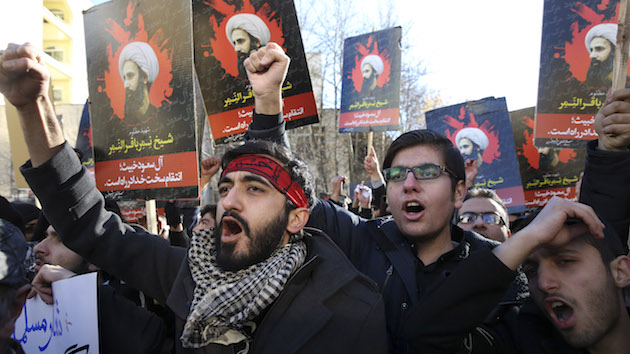 Relations between Shiite Iran and its oil-rich Sunni neighbors across the Persian Gulf have never been warm, and the civil wars in Syria and Yemen have fueled mistrust and proxy battles between the two countries for years. But even those conflicts didn’t manage to bring about the diplomatic meltdown that occurred this weekend, when Saudi Arabia severed ties with Iran and significantly ramped up tensions between two of the Middle East’s most powerful players.

What happened? Saudi Arabia rang in the new year by executing 47 prisoners on Saturday. One of them was a Shiite cleric named Nimr al-Nimr, a longtime critic of the Saudi government who was accused by Saudi Foreign Minister Adel al-Jubeir during an interview with Reuters of “agitating, organizing cells, [and] providing them with weapons and money.” In response, protesters attacked the Saudi embassy in Tehran. Shortly thereafter Saudi Arabia ceased diplomatic relations with Iran.

Bahrain and Sudan have since joined the Saudis in cutting diplomatic ties, and the United Arab Emirates “downgraded” its relations with Iran by recalling its ambassador and reducing staff in Tehran. The Saudis also announced other steps, including cutting off flights between Iran and Saudi Arabia and banning Saudis from traveling to the Islamic Republic.

Why does it matter? Both Saudi Arabia and Iran are major players in international trade, as well as in various conflicts playing out throughout the Middle East, and outright hostility between the two countries could bleed over in many ways.

The diplomatic crisis could affect efforts to broker peace in Syria. Both Saudi Arabia and Iran are deeply enmeshed in Syria’s civil war. Saudis fund Islamist rebels in Syria while Iran supplies weapons, soldiers, money, and diplomatic backing to the Syrian government along with extensive support to its close ally in Lebanon, Hezbollah. Both countries are also important players in any attempt at a peace process for Syria. The UN special envoy for Syria hoped to restart peace talks between the Syrian opposition and the Assad regime this month, but a collapse in Saudi-Iranian relations could sink negotiations before they get going again. “We were hoping that a diplomatic solution could be found to the Syrian crisis in the next few months. Forget about it,” Fawaz Gerges, a Middle Eastern studies professor at the London School of Economics, told CNN.

It could worsen Yemen’s civil war. Saudi Arabia’s southern neighbor, normally ruled by a Sunni-led government, is under the control of a Shiite rebel group called the Houthis. The Saudis launched an air campaign against those rebels in March and has been bombing Yemen ever since. While the campaign hasn’t dislodged the Houthis, it has killed more than 1,000 civilians by the United Nation’s estimate and laid waste to the capital of Sanaa. While Iran supports the Houthis, Yemen experts believe Iran hasn’t backed them in the same large-scale way as it has Hezbollah. But if tensions continue to rise with Saudi Arabia, Iran could be tempted to ratchet up its involvement in Yemen.

World powers are watching the situation closely. Russia has allied itself with Iran in Syria by sending weapons to the Assad regime and launching airstrikes against rebels. Sputnik, a Russian government-run media outlet, quoted a foreign ministry source who said Russia was “willing to play, if necessary, a role as a mediator in the settlement of existing and emerging discords between these countries.” China, a major consumer of Gulf oil, is also watching the situation and has urged both sides to calm tensions.

Uncertainty in the oil market is only rising. Iran has huge oil reserves, and it will finally be able to export that oil to the world market again this year now that Western sanctions are lifting. That could mean even more oil on the world market and another year of low prices—or tensions between Iran and Saudia Arabia could send oil prices rising again. No one’s sure which way it will go.