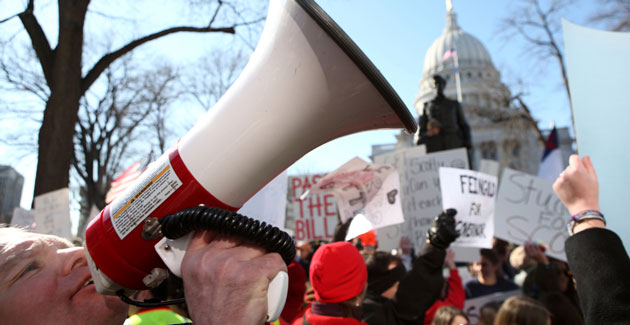 On Monday, the Supreme Court will hear a case that has been likened to Citizens United for its potentially far-reaching ramifications. Instead of eviscerating long-standing campaign finance laws, though, Friedrichs v. California Teachers Association threatens to strike a devastating blow to the nation’s labor movement. Spearheaded by a conservative legal group, the case was designed to weaken public employee unions by challenging a nearly 40-year-old decision that allows them to collect compulsory fees from all employees covered by collective bargaining agreements, even if those employees aren’t dues-paying union members.

The fees for nonunion members at issue in this case, known as “agency fees,” can amount to about $600 a year or more—roughly 2 percent of a new California teacher’s salary. There are about 325,000 members of the California Teachers Association, which is the exclusive contract bargaining agent for teachers in California. Teachers in the state don’t have to join the union, and there are about 29,000 such employees in California who are not CTA members and don’t pay dues, including the plaintiffs in Friedrichs. Even though they’re not members, they still must pay the agency fees that cover the cost of the collective bargaining and representation that the union does on their behalf. These compulsory fees for nonmembers, which may not be used for political advocacy, are designed to prevent so-called free riders—employees who benefit from the union’s representation but don’t pay for it.

The plaintiffs in Friedrichs argue that forcing nonunion members to pay the fees is an unconstitutional violation of free speech and free association because, they allege, in public employee unions, salary and benefit negotiations are inherently political as they affect public policy on education as well as tax dollars. If the Supreme Court rules in their favor, it could deprive public employee unions across the country—groups representing everyone from police officers to postal workers to child abuse investigators—of hundreds of millions of dollars in funding and throw public employee contracts nationwide into potential chaos.

One brief in the case indicates that in states where teachers are covered by collective bargaining but aren’t forced to pay agency fees, about 34 percent are “free riders.” Moreover, states that have the compulsory fees for workers have much higher union membership in the public sector—an average of nearly 50 percent—compared with states where such fees are banned (17 percent).

Those figures help to explain why this case is part of a concerted push by conservatives to sap the political clout of organized labor. In a new report on the case by the Century Foundation, a progressive think tank, senior fellow Richard Kahlenberg writes that Friedrichs can be viewed as “a naked political grab, one that seeks to undermine the power of collective action by hardworking Americans and weakening the ability for unions to promote the interests of workers’ rights nationally.”

The plaintiffs in Friedrichs, who were recruited for the case by a conservative public-interest law firm called the Center for Individual Rights, are largely members of Christian Educators Association International, a right-wing religious group that is also a party in the case.

Founded in 1953, CEAI is a membership organization that bills itself as an alternative to unions, particularly the National Education Association, which the group believes has an anti-Christian agenda because it supports abortion and gay rights. CEAI also offers itself as a home for teachers who are legally exempted from union dues because of religious objections to unions, primarily Seventh-day Adventists, who believe unions require individuals to surrender their autonomy to the majority. CEAI offers members benefits such as liability insurance, but it plays no role in negotiations with employers. In California, even CEAI members are represented by the union in contract negotiations.

CEAI is strongly opposed to same-sex marriage, and one of the reasons the Friedrichs plaintiffs have cited for taking on the California Teachers Association is its opposition to Proposition 8. This 2008 ballot initiative banned marriage equality in the state (until the Supreme Court reversed the measure in 2013). CTA spent over $1 million opposing Proposition 8, but that money did not come from the agency fees at issue in Friedrichs. It came from regular union dues, which the Friedrichs plaintiffs don’t pay.

One of CEAI’s most recent legal fights involved Ohio science teacher John Freshwater, a member of the group who was accused of teaching his students creationism and using a “Tesla coil” to burn crosses into their arms. He was fired, but CEAI backed his wrongful termination case all the way to the US Supreme Court, which ruled against him.

With Friedrichs, the Washington, DC-based Center for Individual Rights is leading the charge. Financed in part by foundations with ties to the Koch brothers, the group was founded in 1989 to further the conservative agenda through aggressive litigation. In the past, it has also received funding from the Pioneer Fund, a foundation established in 1937 to pursue “race betterment” by promoting eugenics. The CIR has a long history of attacking affirmative action policies and defending controversial academics. In one famous case, the center successfully defended a University of New Hampshire professor accused of sexually harassing his students—one episode involved a reference to Jell-O and a dildo—and then celebrated its victory by throwing a Jell-O party on campus.

The lawyer arguing Friedrichs for the CIR on Monday is the pugnacious Michael Carvin, an original CIR board member. A former Reagan administration Justice Department lawyer and now partner at the white-shoe law firm Jones Day, Carvin has also led conservative legal challenges against Obamacare.

At the heart of the Friedrichs case is the Supreme Court’s 1977 ruling in Abood v. Detroit Board of Education. In that decision, the court determined that public employees can’t be forced to pay union dues that might fund political activities, but that agency fees dedicated to collective bargaining are constitutional. An amicus brief in Friedrichs filed by the city of New York notes that the agency fee system has been critical to maintaining “labor peace.” It has bolstered the bargaining ability of public employee unions and allowed city governments to negotiate with a single entity instead of dozens of groups claiming to represent employees. This has helped to avert strikes that can result in hundreds of millions of dollars in economic losses.

The Abood decision has recently come into the crosshairs of conservatives, who have an ally in Justice Samuel Alito. He has attacked the Abood ruling in earlier decisions, most recently in Harris v. Quinn, a 2014 case involving agency fees that also had labor activists fretting the end of unions was near. But the court, in a 5-to-4 decision penned by Alito, declined to obliterate agency fees because the home health workers who were plaintiffs in the case weren’t public employees—they were paid by the state but employed by individuals needing care—and thus weren’t covered Abood. But Alito’s majority opinion revealed his desire to demolish agency fees should a better case come along.

That case was Friedrichs, which only involved public employees and which was already working its way through the court system with the vocal backing of many of the same conservative outfits supporting Harris, including the Koch-funded National Right to Work Legal Defense Foundation. The lawyers representing Friedrichs fast-tracked the case in an effort to speed its arrival at the high court, asking the 9th Circuit Court of Appeals in 2013 to rule against them in order to skip a trial and get straight to the appeals.

The case is one of the most ideological on the court’s docket this term, and it’s likely to invoke some heated deliberations within the court’s marble chambers. Conservatives, meanwhile, are practically giddy over the prospect that the case will drive a stake through the heart of labor unions. Only about 6 percent of the private sector is unionized today. The bulk of labor’s power lies in public employee unions like CTA. Nearly 40 percent of public employees are unionized. Defunding those government workers’ unions by allowing workers to opt out of paying for the costs of collective bargaining, as Friedrichs is designed to do, could decimate what’s left of the American labor movement. As Erik Telford, president of the conservative Franklin Center for Government and Public Integrity, wrote recently, “These are dark days for organized labor, and thanks to the US Supreme Court’s decision to hear Friedrichs v. California Teachers Association, a mortal blow is within sight.”