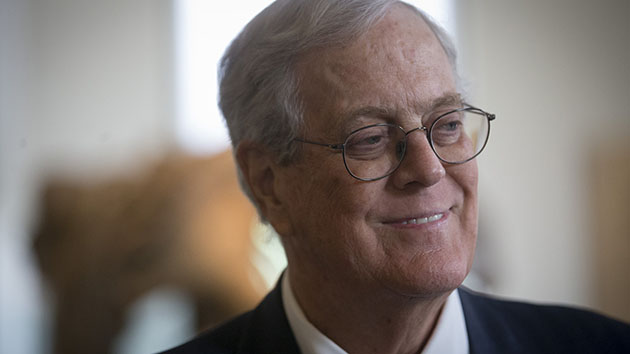 Prize-winning New Yorker reporter Jane Mayer made headlines recently when she released a new book, Dark Money: The Hidden History of the Billionaires Behind the Rise of the Radical Right, that revealed how the father of the Koch brothers once helped build a major oil refinery in Nazi Germany that was a pet project of Adolph Hitler. Overall, the book tells the tale of a small number of ultrarich donors—including Richard Mellon Scaife and Harry and Lynde Bradley—who did much to create the modern conservative moment, with a strong emphasis on billionaires Charles and David Koch. “It is not easy to uncover the inner workings of an essentially secretive political establishment,” the New York Times‘ review of the book notes. “Mayer has come as close to doing it as anyone is likely to come anytime soon.” And there’s a section in the book that should be particularly chilling for journalists, for Mayer describes how she became the target of a nasty opposition research effort after she wrote about the Koch brothers several years ago.

In the summer of 2010, she published a pathbreaking, in-depth piece, headlined “Covert Operations,” which chronicled the rise of the Kochs’ ideological network—dubbed the “Kochtopus”—and the efforts of the publicity-shy libertarian brothers to guide the burgeoning tea party toward policies that favor Koch Industries. The article depicted the Kochs as secretive bankrollers waging a war against President Barack Obama and opposing environmental safety measures. The Kochs were enraged by the story. A lawyer for their company complained; David Koch called the story “ludicrous.” But the New Yorker saw no reason to correct anything. And the kerfuffle seemed to die down. Or so Mayer thought.

While reporting for her book, Mayer discovered that after her story was published, the Koch political machine assigned six or so operatives, who were working in borrowed space in the lobbying firm operated by J.C. Watts, a former Republican congressman, to dig up dirt on her. She notes that a source told her, “If they couldn’t find it, they’d create it.” And Mayer maintains that a private investigative firm, Vigilant Resources International, was hired for this job as well. (This company was founded by Howard Safir, who had been a New York City police commissioner when Rudy Giuliani was mayor.)

Mayer writes that she was at the time unaware of this effort, but she began to spot clues. A blogger asked if she had heard the rumor that a private detective firm was on her trail. At a Christmas party, a former reporter told her that a private investigator had mentioned that some conservative billionaires were looking for dirt on a reporter who had written a story they disliked. Then, in January 2011, a New York Post reporter, Keith Kelly, contacted David Remnick, the editor of the New Yorker, to get a comment on “allegations” that would soon be published claiming that Mayer had borrowed heavily from other reporters. Shortly after that, as Mayer puts it in her book, Jonathan Strong, then a reporter at the conservative Daily Caller, emailed Mayer and Remnick and asked whether her work fell “within the realm of plagiarism.” He sent several examples of her purported theft.

Mayer mobilized quickly. She contacted the writers whose works she had supposedly swiped—in some cases she had given credit to these writers—and they told her they did not consider these instances of plagiarism. Mayer says she sent these facts to the Daily Caller, and the story disappeared. Subsequently, in the New York Post, Kelly wondered, “Who is behind the apparently concerted campaign to smear The New Yorker’s Jane Mayer?” Kelly asked Tucker Carlson, the editor of the Daily Caller, about the origins of these allegations against Mayer, and Carlson replied, “I have no clue where we got it. I never ask the reporters where they get stuff, only whether it’s true. In this case, we didn’t have enough.” Strong declined to talk to Kelly about the story.

The Koch operatives, Mayer was later told by a source she doesn’t name in her book, “thought they had you. They thought they were going to be knighted by the Kochs.” And Mayer observes, “Their search for dirt had started with my personal life, I was told, but when that turned up nothing truly incriminating, they moved on to plagiarism.” Later on, the general counsel of Koch Industries sent a letter to the American Society of Magazine Editors decrying the article in an attempt to prevent the New Yorker from winning a National Magazine Award for the piece.

When Mayer asked Safir if his firm had investigated her, he said, “I don’t comment. I don’t confirm or deny it.” And a spokesman for the Koch brothers would not talk to Mayer about this. Indeed, another Koch brothers spokesman did not respond this week when Mother Jones asked if the Kochs had mounted a secret operation against Mayer.

The covert smear campaign against Mayer did not succeed. But this is a cautionary tale for any reporter who digs too deep into the world of dark money. The super wealthy donors who want to influence politics with cash also have the money to target those who would cast light upon the actions they wish to keep secret.

Clarification: Lynde Bradley died in 1942, and his brother Harry passed away in 1965. The Lynde and Harry Bradley Foundation began in 1942, but it was not until after the death of Harry that it began to focus on public policy. About twenty years later, it received a massive infusion of cash and about that time turned sharply to the right.