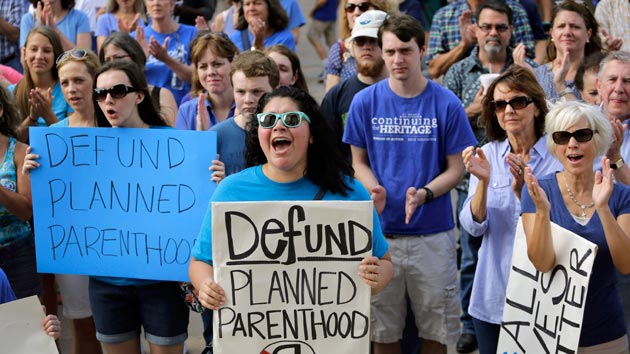 The Harris County, Texas, grand jury tasked with investigating Planned Parenthood announced today that it has cleared the women’s health provider of breaking the law. Instead, the grand jury has indicted David Daleiden and Sandra Merritt of the anti-abortion Center for Medical Progress. Last summer, their group released a series of secretly recorded and deceptively edited videos purporting to show Planned Parenthood officials discussing the sale of fetal tissue—which would be illegal. Houston Public Media reports on today’s grand jury indictment:

David Daleiden and Sandra Merritt have been indicted for Tampering with a Governmental Record, which is a felony. Daleidan was also indicted for Prohibition of the Purchase and Sale of Human Organs, meaning he illegally offered to purchase human organs in the video recording. A violation of this section is a Class A misdemeanor.

Following the release of the CMP’s videos, six states tried to defund Planned Parenthood, 11 states have investigated the women’s health provider (none found evidence of fetal tissue sales), and three congressional committees launched their own inquiries.?

The grand jury’s review was extensive and lasted more than two months, noted Harris County District Attorney Devon Anderson in a press release. “We were called upon to investigate allegations of criminal conduct by Planned Parenthood Gulf Coast,” Anderson said in the statement. “As I stated at the outset of this investigation, we must go where the evidence leads us. All the evidence uncovered in the course of this investigation was presented to the grand jury. I respect their decision on this difficult case.”

“These anti-abortion extremists spent three years creating a fake company, creating fake identities, lying, and breaking the law,” said Eric Ferrero, vice president of communications for Planned Parenthood Federation of America, in an emailed statement. “When they couldn’t find any improper or illegal activity, they made it up.”

This is a breaking story. We are updating this post as the story develops.