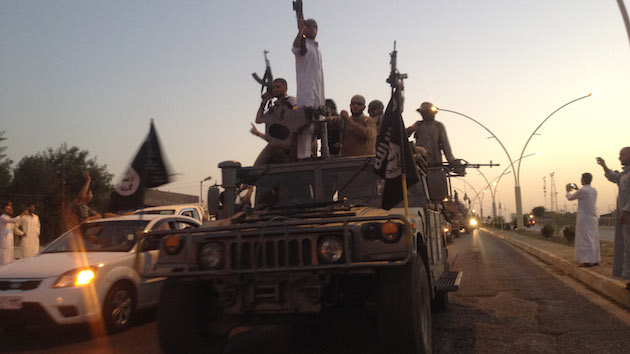 For more than a decade, the United States has supplied huge quantities of weapons and military hardware to the Iraqi government—and a large chunk of that equipment has disappeared and landed in the hands of ISIS fighters and members of Iranian-backed Shiite militias responsible for massacring civilians. Everything from M-16s and bullets to Humvees and tanks have been lost. But neither the US nor Iraqi governments can say how much US-supplied materiel has been diverted to militant groups or how it’s ending up there.

Losing weapons to extremists and insurgents has long been a problem for the US military and the Iraqi army, but it became more urgent after ISIS seized chunks of Iraq in 2014, overrunning Iraqi troops and sweeping up their weapons. With that equipment, ISIS solidified its hold on its captured territory and drew the United States back into Iraq. Still, the Pentagon has not been able to monitor the loss of its weapons and other supplies to ISIS. “The bottom line is that the US military does not have a means to track equipment that has been taken from the Government of Iraq by ISIL,” Commander Elissa Smith, a Defense Department spokeswoman, wrote in an email to Mother Jones, using the government’s preferred acronym for ISIS.

It’s not supposed to work this way. “The US does place a lot of restrictions—in theory—on [arms] transfers,” says Patrick Wilcken of Amnesty International, who worked on a recent report on ISIS’s weaponry. If the United States wants to provide arms to another country, the Department of Defense is required by law to obtain assurances that the weapons will be secured. There’s a Pentagon organization called the Defense Security Cooperation Agency that carries out and monitors these arms shipments and makes sure the weapons are being used for their intended purposes. And a 2013 UN treaty bars the United States from providing arms to countries where weapons could end up with armed groups committing human rights violations. But despite these mechanisms, significant amounts of US-supplied arms—including rifles, pistols, and ammunition—are still going missing, largely thanks to the Iraqi military’s patchwork supply system.

The source of the problem is no mystery: the Iraqi military. It keeps tabs on its weapons only through what Wilcken describes as “scraps of paper.” In September, the Pentagon’s inspector general issued a report noting that the Iraqi army lacked any sort of supply database and instead relied on “a manual, paper-based system for tracking supplies and equipment.” That report came eight years after the Government Accountability Office found in 2007 that nearly 200,000 US-supplied weapons went unaccounted for in Iraq, due to shoddy recordkeeping by the Iraqi army and the US-led coalition. The GAO couldn’t tell where those weapons went, but many probably landed in the hands of jihadists. Wilcken’s report found that a “substantial portion” of ISIS’s weapons come from Iraqi army stocks.

“Many developing states have no post-delivery controls [for weapons] in place, or have poor mechanisms for applying the controls which exist,” says N.R. Jenzen-Jones, the director of Armament Research Services, a consultancy that tracks global arms trade. “Weapons delivered to such countries can be subject to limited oversight at best, often quickly slipping ‘outside the system’ in a conflict situation.”

This issue of the Iraqi military losing control of US-supplied weapons has not attracted much congressional attention, at least not publicly. The House and Senate foreign relations committees have jurisdiction over arms sales, but neither has held a hearing on the topic in the past two years. A Republican aide on the Senate committee says staff members have received briefings on Iraq’s arms storage problems, but he would not discuss the details of these briefings or say when they had occurred.

By shipping arms to Iraq despite these problem, the US government risks violating both domestic and international law. The Arms Export Control Act of 1976 says the United States can only provide weapons to partners who “will provide substantially the same degree of security protection afforded to such article or service by the United States Government.” For example, the US military keeps its M-16 rifles locked in an armory, and it tracks each gun by the serial number. If an M-16 is supplied to Iraq, both the Iraqi army and the Pentagon are responsible for monitoring it. And as part of the US monitoring process, American inspectors are supposed to visit Iraqi supply depots to make sure the Iraqi army is securing its weapons and ensuring the arms are only used by its own soldiers.

Yet the Pentagon inspector general’s report says that’s not happening. US personnel “at the Taji National Depot did not have accurate knowledge of the contents of individual supply warehouses under Iraqi control at that location or at other supply locations throughout Iraq,” the report states. The IG investigation also found that Iraqi officers refused to grant American advisers access to most weapons storage facilities. So in addition to the US military not being able to tell how many of its weapons have been obtained by ISIS or other jihadi groups, no one in the Iraqi or American governments can keep accurate track of what the Iraqi army has in its possession in the first place.

With this spotty tracking system, the United States might be violating the Arms Trade Treaty it signed two years ago. The pact, which was adopted by the UN General Assembly in 2013, requires the United States and other nations to make efforts to confirm that their arms sales go where they’re supposed to go, and that the weapons won’t be used to commit atrocities. The Senate hasn’t ratified the treaty, but given that the United States has signed the accord, it cannot take actions that run counter to its treaty obligations. But there is no method of enforcement or punishment in the pact.

In response to questions from Mother Jones, Lt. Colonel Joe Sowers, a Pentagon spokesman, says the “most recent [Office of Security Cooperation] security assessment rated Iraq as satisfactory” in its monitoring systems, and that “Iraq is complying with end-user assurances required by the AECA [Arms Export Control Act] prior to receiving exports of defense articles.” Yet Sowers acknowledges that “the current conflict in Iraq and the level of violence limits some aspects of…monitoring activities, including travel to many areas of Iraq and access to Iraqi units in combat areas, as well as combat use, damage and losses of war materiel.”

Weapons are lost or captured by the enemy in all conflicts. But the extent of this problem in Iraq appears to be significant, and the Pentagon cannot tell just how bad it is—or how it can fix it. The inspector general’s report from September simply recommended that the United States and Iraq “develop a plan that allows US and Coalition access to the warehouses…within an expedited time period,” while Sowers says only that the US government “will continue to work with Iraq to improve their capability to control weapons and other sensitive equipment.”