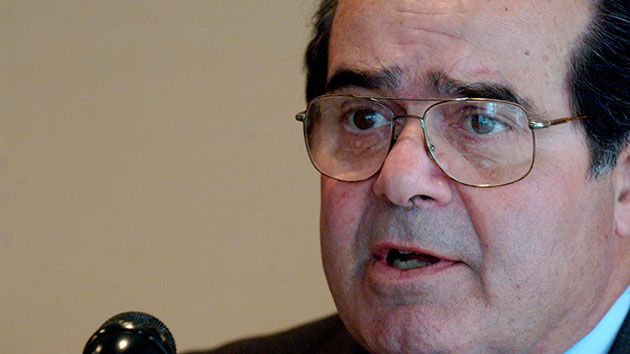 On Sunday, as news of Supreme Court Justice Antonin Scalia’s death a day earlier sparked questions about the protocol for filling his seat, radio host Alex Jones was tackling a more serious dilemma: What if Scalia was murdered?

“You just get used to this: ‘Scalia found, it’s natural, nothing going on here, he just died naturally,'” Jones said on his show. “Then you realize, Obama is just one vote away from being able to ban guns, open the borders, and actually have the court engage in its agenda and now Scalia dies. My gut tells me they killed him, and all the intellectual evidence lays it out.”

Conspiracy theories are Jones’ calling card, and they often bounce around right-wing radio without entering the political mainstream. But the day after Jones presented his theory, a much more powerful voice joined the conversation about a possible Scalia murder: Donald Trump.

On Monday, the Republican presidential front-runner fanned the flames of the Scalia assassination theory. Trump, who heads into the upcoming South Carolina primary and Nevada caucus with leads of 18.5 and 13 points, respectively, called Scalia’s death “pretty unusual” during a broadcast of The Savage Nation with host and conservative commentator Michael Savage. Savage raised the possibility that Scalia had been murdered, and asked Trump whether an immediate autopsy was necessary.

“Well, I just heard today and that was just a little while ago actually—you know I just landed and I’m hearing it’s a big topic—that’s the question,” Trump said. “And it’s a horrible topic, but they say they found a pillow on his face, which is a pretty unusual place to find a pillow.”

Twelve percent of men between the ages of 75 and 84 are diagnosed with coronary heart disease or experience a heart attack every year. But now that Trump has weighed in, it’s clear that an alternate explanation for Scalia’s death—one in which the US government assassinated a Supreme Court justice and left the murder weapon on his face—will be playing a role in the political conversation in the days and weeks to come.