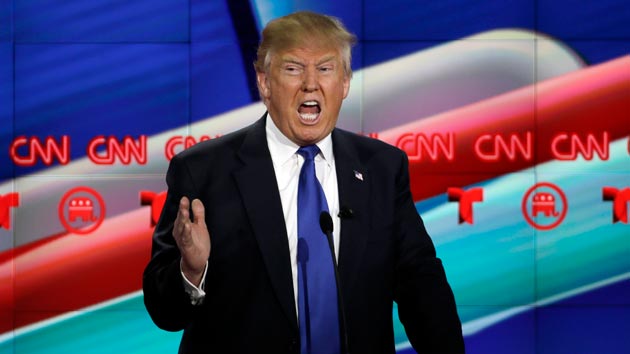 During Thursday’s CNN-Telemundo GOP debate, front-runner Donald Trump strayed from his colleagues on the campaign trail by saying some nice things about Planned Parenthood.

He’s made similar points before. “They do some very good work,” Trump said of Planned Parenthood on Sunday’s Meet the Press. “Cervical cancer, lots of women’s issue, women’s health issues are taken care of.”

But throughout the campaign, Trump has said—and he reiterated this point at Thursday’s debate—that as long as Planned Parenthood continues to provide abortions, he would defund the women’s health provider as a show of his pro-life bonafides.

“I would defund it because of the abortion factor, which they say is 3 percent. I don’t know what percentage it is,” he said at Thursday’s debate in Texas. “But I would defund it, because I’m pro-life.”

But here’s the thing about Trump’s pro-life pledge: The federal Hyde Amendment already prohibits the use of federal funding for abortions, except for those performed in cases of rape, incest, and where the life of the mother is at risk. This amendment has been attached to federal appropriations bills regularly since the 1970s. Planned Parenthood receives virtually no federal funds to provide abortions. It’s that simple.