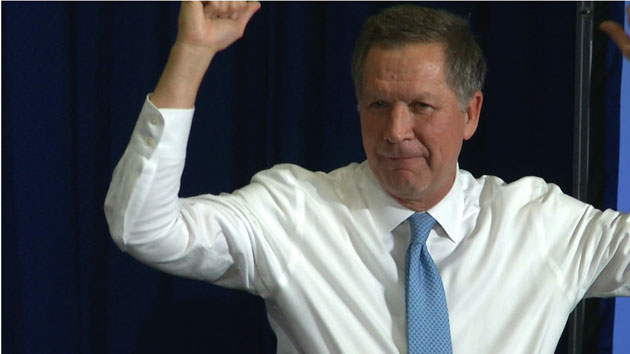 Cecile Richards, president of Planned Parenthood Action Fund, called the law “devastating” and compared the changing reproductive rights landscape in Ohio to the current situation in Texas, where more than half the state’s abortion clinics have shut down due to restrictive legislation. Over the course of Kasich’s tenure, half the abortion clinics in Ohio have been shut down.

“It’s clear Kasich has no regard for women’s health or lives, and will stop at nothing to block health care for the tens of thousands of Ohioans who rely on Planned Parenthood,” Richards said in a statement issued by Planned Parenthood.

Gov. John Kasich, fresh from his strong showing in New Hampshire last night, is likely to sign an Ohio bill into law that prohibits some state and federal funding from being distributed to facilities that perform and promote what are known as “nontherapuetic abortions”—abortions performed in cases that are not related to rape, incest, or life endangerment of the mother—even though the funds are not used to pay for any abortion services. The measure effectively strips Ohio‘s Planned Parenthood affiliates of $1.3 million in funding.

The new law targets specific Planned Parenthood programs for services such as HIV and STI testing, as well as cancer screenings, rape prevention programs, and sex education for youth in foster care and the juvenile detention system.

The cuts will also affect the Healthy Moms, Healthy Babies program, a neighborhood outreach effort by Ohio’s Planned Parenthood that offers support and education to high-risk African American women in Mahoning and Trumbull counties. These women receive in-home visits throughout their pregnancies and for the first two years after giving birth. In these impoverished areas, African American women are twice as likely to give birth to a baby with a low birth weight than the population at large. Ohio ranks 45th nationally for its infant mortality rate, and has one of the highest rates of infant death for African American mothers in the country.

In her testimony opposing the measure, Kelli Arthur Hykes, director of public health policy at Columbus Public Health, pointed to the lack of capacity in local health departments to make up for the shortfall: “For example, in Columbus, we estimate that with additional funding, we would be able to grow our sexual health and women’s health services by about 10 percent over the next few years. This would barely put a dent in the anticipated need, especially if there is an immediate loss of funding for Planned Parenthood before a local health department could ramp up services.”

Wednesday morning, in a failed effort to halt passage of the legislation, Planned Parenthood supporters delivered valentines to lawmakers, expressing their love for women’s health care and asking the lawmakers to vote against the measure. The bill passed the House in a 62-32 vote.

It is possible this measure might lead to a replication of what happened in Texas after Planned Parenthood was defunded there in 2012. A recent study published in the New England Journal of Medicine showed an increase in birth rates among low-income Texas women and a decrease in contraception insurance claims.

Kasich, who gained new prominence in the GOP presidential race after unexpectedly placing second in the New Hampshire primary, has a long, consistent history of fighting reproductive rights in Ohio. In his five years in office, Kasich has signed every anti-abortion bill to cross his desk as governor. When a female voter in New Hampshire asked him about Planned Parenthood, he was clear about his stance: “We’re not gonna fund it.” His rise in the Republican field prompted an immediate response from Planned Parenthood Advocates of Ohio, which circulated what was described as a “five-figure ad buy” showcasing his record on reproductive rights.

“John Kasich has systematically enacted measure after measure to make it more difficult for women to access reproductive care and safe and legal abortion,” said Cecile Richards, president of the Planned Parenthood Action Fund. “And now, under his leadership, it could get even worse.”