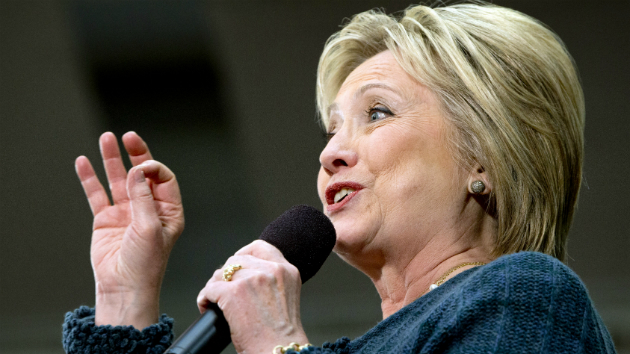 Asked at a town hall meeting at New Hampshire’s Henniker College how to handle the increasing role of moneyed interests in Washington, Hillary Clinton told supporters that lobbyists should be exposed and publicly called out.

“Maybe use social media? Maybe make a concerted effort to really call these people out all the time, get some social pressure on them, get people to know their names,” Clinton suggested, pointing, with obvious relish, to how the New York Daily News has taken to calling the National Rifle Association president Wayne LaPierre “Jihadi Wayne” for his refusal to support blocking individuals on the “no fly list” from getting gun permits.

“We’ve got to try new tactics, we’ve got to go after them and we have got to have tougher laws,” Clinton said.

But Clinton is not entirely clear of ties with lobbyists. Presidential campaigns are required to report how much money they have raised with the assistance of bundlers—supporters who fundraise on behalf of a candidate—who are also registered lobbyists. Out of all the presidential candidates, Republican or Democrat, Clinton has raised the most money—$717,000—from lobbyist bundlers. The next closest is Marco Rubio, who has raised $676,000 with the help of lobbyists.

Clinton did, however, make a point of noting that, while lobbyists are not new, the business of selling influence has taken a particularly cynical turn.

“It’s not just the influence they peddle, it’s the way they peddle the influence,” Clinton said. “No matter who you are lobbying for, you’ve got to keep the people you are representing upset and angry and worried that something is going to be done to them, to try and keep them paying you.”

Clinton pointed to LaPierre and the NRA as classic examples.

“‘Oh my gosh, background checks! Oh my gosh, they’ll come for your guns!'” she said mockingly, citing what she said were the NRA’s exaggerated warnings about closing loopholes in existing gun laws. “According to them, next thing you know, black helicopters will be in your yard. They are masters at this kind of fearmongering.”