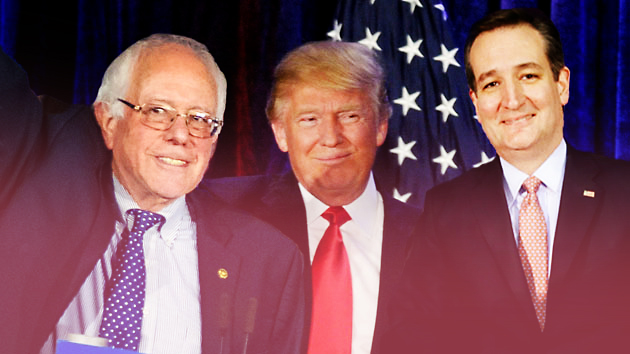 As Iowans trekked to caucuses across their state on Monday evening, both major political parties were on the verge of hostile takeovers. By night’s end, the Democratic establishment and Hillary Clinton had apparently held the threat at bay—barely!—with the former secretary of state seemingly defeating Sen. Bernie Sanders, a self-professed democratic socialist channeling populist ire, by a small number of votes in what was almost a tie. On the Republican side, Sen. Ted Cruz, a nemesis of the GOP establishment, prevailed in Iowa the traditional way by rounding up evangelical and social conservative voters, and Donald Trump, the reality television tycoon, placed a close second (28 to 24 percent) with his they’re-all-losers schtick—meaning that half of Republican voters rebelled against their party’s poohbahs.

Anyone reading this knows the usual yada-yada-yada of Campaign 2016: This is the year of the outsiders. Donald Trump entered the Republican race, called everyone an idiot, and turned the GOP into the latest extension of Trump Empire™. Cruz, a onetime corporate lawyer (who happens to be married to a Goldman Sachs executive), campaigned as a pious bomb-thrower eager to take on the do-nothing status-quoticians of Washington (Republican and Democratic). And Sanders, the 74-year-old Vermont senator who a year ago was not even a Democrat, crashed Clinton’s coronation with his call for a “political revolution” that would break up the big banks, slam the billionaires class, and deliver single-payer health care and free college to all Americans. But this convenient, sound-bite-friendly description of what’s going on is too easy an explanation, because the supposed outsider energy in each party is different, particularly when it comes to Trump.

Let’s start with the Dems. Sure, Sanders called for smashing up the big-money establishment and implied (strongly!) that Clinton, a Washington insider who has pocketed campaign cash and speaking fees from Wall Street, was part of the corrupt system. Not to take anything away from Sanders’ populist message and his campaign’s delivery, but he was able to take advantage of—that is, speak to—a pre-existing and ever restless ideological bloc within the Democratic primary electorate: progressives.

According to a Gallup poll taken last year, 44 percent of Democrats call themselves liberals. This number has been on a steady rise since 2000, when only 29 percent claimed that label. So as several Democratic strategists have pointed out to me in recent weeks—including those backing and not backing Clinton—Sanders began with a big potential base to tap. Call it the Elizabeth Warren Collection: populist-minded Democrats yearning for a crusader. Any Democratic candidate challenging Clinton with a heartfelt, authentic and enthusiastic progressive appeal had a chance to attract these Democratic voters. (This wing has always been there. In the 1980 Democratic primary, Teddy Kennedy won 37 percent of the vote to the 52 percent bagged by incumbent President Jimmy Carter.) It may be a bit of a mystery why former Maryland Gov. Martin O’Malley flopped so miserably in his effort to court these looking-for-a-hero Democrats. But the fiery Sanders, whose leftism was never in doubt, went for them, and when Clinton, whose progressivism has often been debated, seemed to stumble (those “damn emails”) and failed to inspire younger and more liberal Democrats, Sanders had an opening to present himself as this year’s true progressive model and a cool alternative to the ideologically suspect and baggage-heavy Clinton. Voila! He made a connection with a major Democratic subset that has always been there.

Forget about Iowa for a moment—especially now that this unrepresentative event is done—and look at the average of the national polls in the Democratic race. Clinton leads Sanders, 52 to 37 percent. Sanders’ take is darn close to that 40 percent mark long associated with the progressive wing. Sanders surpassed that level in Iowa, and he’s likely to do so in New Hampshire, where three recent polls have put his lead over Clinton between 20 percent and 31 percent. Yet in the long run, can he continue to stay above 40 percent—particularly when the contest shifts to states with more diverse electorates (meaning more black and Latino voters) and states where voters are less familiar with this self-proclaimed socialist? Those contests will show whether Sanders has reshaped the party or whether he has only deftly addressed a desire Clinton could not fulfill.

Cruz did something similar to Sanders: He appealed to an ideological bloc that pines for a champion. With the collapse of Ben Carson, who at one point led the GOP pack in Iowa, Cruz, who fielded an effective on-the-ground organization, was able to consolidate much of the social conservative vote. (Carson placed a distant fourth behind Sen. Marco Rubio, who came in a close third with 23 percent.) Still, Trump’s ability to grab one out of four voters in Iowa—and his commanding lead in New Hampshire polls—indicates his bid to seize control of the Republican Party has not been neutralized.

Trump has not been waging an ideological war. He is no Barry Goldwater or Ronald Reagan. Just as there is a progressive base in the Democratic Party, there is a conservative foundation in the GOP, and those right-wing heroes of yesteryear won the Republican presidential contests (respectively in 1964 and 1980) by rallying the conservative grassroots within the GOP. At the time, each contended that the path to victory for the GOP was to beat back the more moderate elements of their party (Take that, Nelson Rockefeller! Ka-pow, George H.W. Bush!) and run to the right in November. (Only one of the two had their argument proven correct in the general election.) Theirs was an ideological mission. Cruz adopted this model, and he fared well in a state that has in recent years rewarded Republicans who appeal to the religious right. He’s an outsider in Washington, but not within this historical framework.

Trump’s play was not to become the leader of the party’s conservative wing. He’s been waging a cultural revolution, not an ideological rebellion, within the GOP. His main argument, such as it is, is not that the government is too big, but that everyone in government—and just about everyone who doesn’t agree with him—is stupid. And he’s a winner. (Well, at least until Monday night.) With his campaign, the political is the personal. His policy prescriptions, if they deserve to be called that, do not hew to a clear ideological line. He bashes hedge fund guys, calls for The Wall, wants less taxes, opposes trade deals backed by Big Business, decries the corruption of Washington (big-money donations and special-interest lobbyists), and derides the US invasion of Iraq, but he vows to obliterate ISIS with a massive, you-won’t-believe-how-big military buildup. It’s a mishmosh.

Trump is a protest candidate protesting…just about everything, as he peddles bigotry by pushing a ban on Muslims entering the United States. He’s not playing to the ideological voters of the GOP, but to the angry ones. His target audience: people who resent pushing 1 for English and 2 for Spanish. And I’m guessing many of these people have spent the last eight years detesting President Barack Obama, suspecting he’s some kind of secret Muslim, Kenya-born socialist who has a clandestine plan for destroying the United States of America. This hatred of Obama has been encouraged and exploited by leading Republicans who gained power in Washington with the tea party. These establishment GOPers giggled with delight as their mad-as-hell voters rushed to the polls, after being told that Obama was setting up death panels, that Obamacare would wreck the economy, that the president had once palled around with terrorists, and that Obama was feckless and dictatorial. They fed the beast. But that only created hunger for more hatred.

Enter Trump, who first auditioned for this role as a birther. Here was a guy brave enough to tell the Obama despisers the real truth. Here was a guy willing to target Muslims. Here was a guy who would characterize Mexican immigrants as rapists and criminals. Here was a guy who would mock all those other Republicans who wouldn’t talk this way, essentially declaring them phony-baloney (and weak and ugly). The infuriated GOP voters who had bought the Republican propaganda that Obama has destroyed the United States gobbled all this up. Make America great, indeed. These are voters not seeking an ideological crusader who quotes the Constitution and presents intellectually sound arguments for smaller government and lower taxes. They are looking for a venter-in-chief who is as furious as they are and who promises that he and the nation will win, win, win.

The GOP unleashed the dogs of resentment and rage. And a bombastic, arrogant, demagogue billionaire shouted to them, “Follow me, not those louts in Washington.” Trump’s takeover of the GOP was going smoothly until Cruz, who has also tried to capitalize on right-wing resentment, bested Trump in Iowa, and Rubio, a tea partier turned establishment favorite, came within 3,000 votes of bumping Trump to third. Now Trump’s going to have to try harder. And it will be interesting to see how voters respond to a diminished Trump. He still is positioned to do well in New Hampshire. And after that, why not Trump victories in South Carolina and Nevada (the land of casinos), and then the Southern states that hold primary contests on Super Tuesday? But Cruz and Rubio will be nipping at his heels. (Watch the establishment money flood into Rubio’s campaign treasury.) And there’s no telling whether the Trump bubble has burst or whether he can return to the top of the heap with what will likely be an intensified effort to inflame the passions of irate voters.

After Iowa, the Democratic Party and Clinton are facing a fierce ideological challenge from an unlikely and previously underestimated source, while the Republican old guard is confronted by Cruz’s traditional assault and Trump’s unconventional attack. It’s the season of disruption.