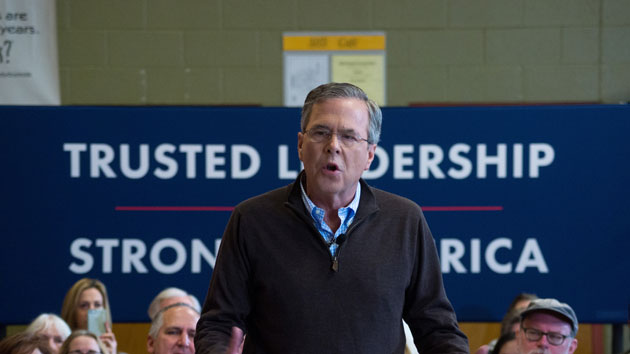 You can’t avoid campaign finance reform in the run-up to Tuesday’s New Hampshire primary. It feels a little weird to type that, given the continuous series of setbacks reformers have suffered on that issue over the last decade, but it’s true. Talk to anyone at a Bernie Sanders rally and it’s the first thing that comes up; on the Republican side, Donald Trump has made his lack of big donors a centerpiece of his campaign.

Even Jeb Bush, whose $100-million super-PAC, Right to Rise, is blanketing the airwaves here in the Granite State (and has a spin-off dark-money group, Right to Rise Policy Solutions), says something needs to be done. Taking questions at a Nashua Rotary Club on Monday afternoon, Bush told voters that it will take a constitutional amendment to overturn Citizens United and stop the glut of dark money entering the political process:

The ideal thing would be to overturn the Supreme Court ruling that allows effectively unregulated money [for] independent [groups], and regulated money for the campaigns. I would turn that on its head if I could. I think campaigns ought to be personally accountable and responsible for the money they receive. I don’t think you need to restrict it—voters will have the ability to say I’m not voting for you because [some company] gave you money. The key is to just have total transparency about the amounts of money and who gives it, and to have it with 48-hour turnaround. That would be the appropriate thing. Then a candidate will be held accountable for whatever comes to the voters through the campaign. Unfortunately the Supreme Court ruling makes that at least temporarily impossible, so it’s going to take an amendment to the Constitution.

Now, Jeb hasn’t turned into Bernie Sanders. He’d just like unlimited donations that aren’t anonymous, and he’d like whatever is disclosed to be disclosed a lot quicker. The subtext here is that while Bush is benefiting from a nonprofit that accepts anonymous unlimited donations, his backers have expressed a lot of frustration with outside groups supporting Jeb’s rival, Sen. Marco Rubio. Right to Rise chief Mike Murphy said last fall that Rubio is running a “cynical” campaign fueled by “secret dark money, maybe from one person.”