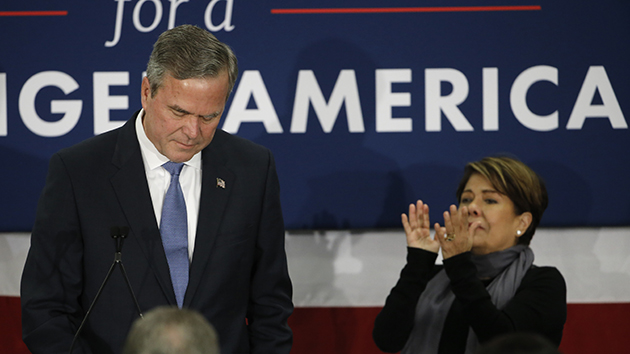 Jeb Bush is out. After disappointing finishes in Iowa, New Hampshire, and now South Carolina, the former Florida governor announced Saturday evening that he is ending his run for the GOP presidential nomination.

“Tonight I am suspending my campaign,” said an emotional and tired-looking Bush. “Yeah, I am,” he confirmed, after a few people in the crowd shouted, “No!”

“In this campaign I have stood my ground, refusing to bend to the political winds,” he said. “Ideas matter, policy matters.”

To his fellow GOP contenders, Bush congratulated the candidates still “on the island.” Bush, who has taken an aggressive stance recently against front-runner Donald Trump, did not take this opportunity to attack the business mogul.

Bush’s debate performances steadily improved throughout the campaign, particularly when he began to take on Trump. But that failed to give his sagging campaign the lift it needed. Bush came in sixth place in Iowa, fourth in New Hampshire, and is at the back of the pack in South Carolina, far behind Trump, Ted Cruz, and Marco Rubio. For weeks, the press has noted the sad tone of Bush’s struggling campaign. Tonight, it’s finally over.