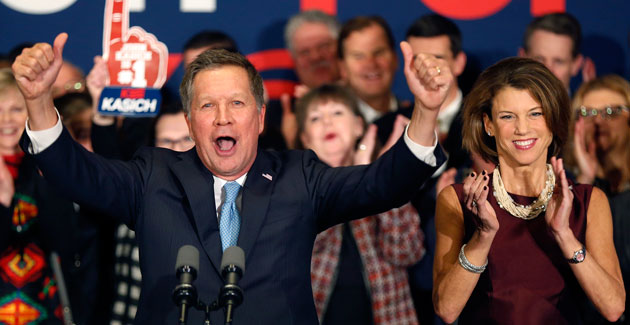 “Tonight, John Kasich is the story coming out of New Hampshire,” John Sununu, a former US senator from the state, declared as he introduced the Ohio governor to a packed ballroom of supporters here in Concord. The crowded risers at the back of the room, lined with TV cameras and photographers, attested to the shifting narrative created by Kasich’s surprise second-place finish in the New Hampshire Republican presidential primary.

Kasich himself seemed slightly shell-shocked by how well he had performed, after initially laboring in “totally obscurity” as he criss-crossed New Hampshire to introduce himself to voters. “There’s something that’s going on that I’m not sure that anybody can quite understand,” he said when he took the podium. “There’s magic in the air with this campaign. Something big happened tonight.” The question for the Kasich campaign, which has focused its resources heavily on New Hampshire, with the candidate holding nearly 190 events in the state, is what comes next? South Carolina, with its base of religious conservative voters, is not considered Kasich country. And more than a month will elapse between his strong New Hampshire finish and the contest in his native Ohio.

Kasich has run a positive if deeply introspective campaign. “We never went negative because we have more good to sell than to spend our time being critical,” he said, adding, “Tonight the light overcame the darkness.” His message of hope and healing—he has repeatedly urged his supporters to “just slow down” and listen to others—has seemed out of place in a race that has been dominated by a candidate, Donald Trump, who has thrived on divisiveness.

“There are many people in America who don’t feel connected,” he said tonight. Out on the campaign trial, hearing the stories of others experiencing pain and loss had changed him, Kasich said. “I’m going to go slower.”

Yet even the plaintive Kasich seems to understand that slowing down might not be an option if he hopes to extend the New Hampshire storyline into additional victories. “Tonight, we head to South Carolina,” he said. “There’s so much that’s going to happen; if you don’t have a seatbelt, go get one.”