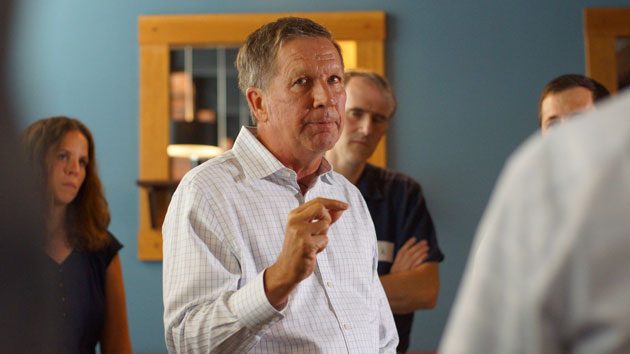 John Kasich’s town halls are different than anyone else’s in New Hampshire, and the first person who will tell you that is John Kasich. “White Stripes at a Republican town meeting!” he said, after taking the floor to “Seven Nation Army” Friday evening in Bedford, New Hampshire. “That has never happened before in American history.” He likes to make a lot of jokes, sometimes even funny ones, and to direct non-sequiturs at unsuspecting audience members. (Before taking questions, he paused to reflect on a snowball fight he’d taken part in earlier in the day: “I tackled one of my friends!”) When it ended, there was a confetti machine and a triple-layer cake for the attendees.

But there’s a serious message underlying his irreverence: he’s a results guy. Take a look at Ohio, and if you like what you see, you should vote Kasich on Tuesday. The problem arises when those voters look at Ohio and instead read about the town of Sebring, where elevated levels of lead were found in the drinking water and residents weren’t notified for five months. (Read the Columbus Dispatch for a fuller accounting.) With Kasich in a fight for second place in New Hampshire, and the water crisis in Flint making national headlines, he’s finding the issue impossible to avoid.

Midway through the event, Kasich took a question from a man who had read about the crisis in Sebring this morning. He wanted to know one thing: “I was wondering if you’ve had a chance yet to personally apologize?”

“Well first of all, our top administration, the [Ohio] EPA, went immediately to the village,” Kasich said. “We had warned the village to tell everybody that there was a risk. We have sent tests out; we have had controllers in there working to make sure the chemicals are right, because the water coming in, sir, is clean. And so at the same time we have done that, we took the operator and we got rid of him. And the federal EPA came in and said he did more than was even federally required of him. So we worked on it all the time, we worked on it with the formulas, the chemicals, and we worked to make sure that at the end of the day people are gonna be okay.”

“Have you apologized?” the man asked again. Kasich wanted to move on, but the next question was about lead, too. A middle-aged woman in the second row, more sympathetic to Kasich than the first man, raised the spectre of the “800-pound donkey in the room” (that would be Hillary Clinton).

Clinton had made clear at Thursday’s debate that she would be campaigning on getting justice for Flint, this voter noted. And she “wasn’t remotely nice” about it. “I understand sodium is being added back into the water and I understand that Sebring is a lot smaller than Flint. But she will, I am sure, bring it up. It’s the Clinton machine. So my question to you is she will look at you and say, ‘You hired Butler, he even went on television and said that he was a little slow in responding to the situation there.’ How do you stand up to Hillary and debate?” (Craig Butler is the head of the Ohio EPA.)

Kasich pivoted. “Look, our guys acted immediately and that’s how we handle every crisis,” he said. Then he switched gears and talked about how many Democrats he won over in his 2014 re-election. But it’s a question that’s not likely to go away any time soon.