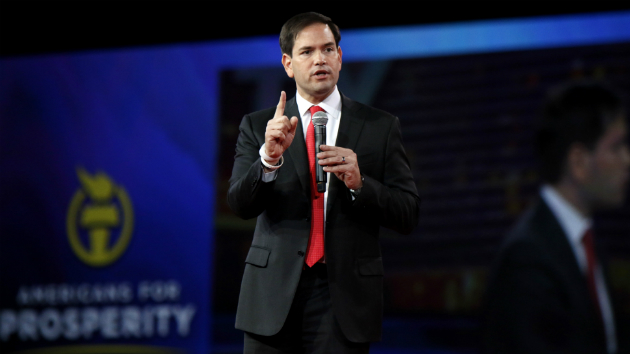 Did Marco Rubio just pick up the biggest endorsement of all? Despite pledging nearly $900 million from their network of donors to fight the Democrats in the 2016 election, Charles and David Koch have been largely missing in action during the primary battle. But Politico is reporting today that their top political operative, Marc Short, is joining Rubio’s campaign as a senior adviser.

It’s not an actual endorsement by the Kochs, but nabbing Short is a big deal for Rubio. For the past few years, Short has served as the president of Freedom Partners, the nerve center of the Kochs’ sprawling political operation. Freedom Partners has a lot of strengths, but the two biggest are arguably money and data. The group is organized as a membership-based organization, with Koch network donors kicking in a minimum of $100,000 per year—and many contributing much more than that. The group raised and spent at least $250 million during the 2012 election and almost $130 million in 2014. As the man at the forefront of the Kochs’ vast political fundraising operation, Short may have the best Rolodex of donors in the world.

The second area where Freedom Partners has excelled is data—one of Short’s specialties. Freedom Partners is an investor in i360 LLC, a sophisticated databank of voter information that has been augmented with personal information gathered by campaigns and commercial groups. The group has data on millions of American voters and its voter files have become one of the must-have tools for most Republican campaigns.

Short is a longtime political operative who got his start working for Colonel Oliver North’s failed congressional campaign in 1994. He went on to a series of high-level staff jobs working for GOP lawmakers on Capitol Hill, including serving as chief of staff for the House’s Republican Conference. As the head of Freedom Partners since 2013, he surely has a good grasp on the money and the data. It remains to be seen whether Short’s move to the Rubio campaign is a sign that the Kochs and their donors are lining up behind the Florida senator. But nonetheless this is very good news for Rubio.