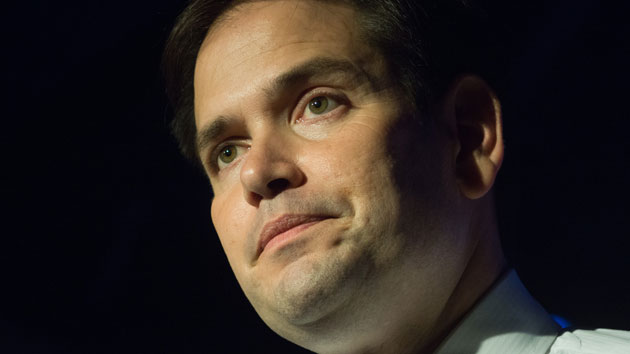 The premise of Marco Rubio’s campaign in South Carolina is a simple one. It was best summed up by Rubio spokesman Alex Conant: Rubio is building “a Republican Party that doesn’t look like your dad’s Republican Party.”

For evidence, one need look no further than the group of wisecracking young GOP politicians who joined him at the Swamp Rabbit CrossFit gym in Greenville on Thursday morning. The group included Sen. Tim Scott, the first African American senator from the South since Reconstruction, who occupies the seat formerly held by segregationist Strom Thurmond; Gov. Nikki Haley, the daughter of Sikh immigrants, who led the push to remove the Confederate flag from the grounds of the state Capitol last year; and Rep. Trey Gowdy, who chairs the Benghazi committee. Okay, Gowdy is a white guy, but he is at least Gen X and also a wizard. And they were all at the gym to endorse the son of Cuban immigrants who jokes about his fluency in Spanish while campaigning in a state where legislators have regularly pushed English-only laws.

Rubio’s surrogates drew attention to their diversity with varying degrees of subtlety. “He is honest, he is humble, he is historic, he represents our state in an incredible way,” Gowdy said of Scott.

“She understands the journey of the American dream in a very unique way,” Scott said of Haley.

“Take a picture of this,” Haley said of the four of them, when they came on stage for a curtain call at the Swamp Rabbit. “Because a new group of conservatives has taken over America. It looks like a Benetton commercial!”

For his part, Rubio likes to emphasize his youth (he’s 44, he says, but feels 45) and boasts that he hails from a “new generation” that can “turn the page” on the 20th century. He doesn’t talk much about migrants or refugees. (When asked about American Muslims, he sounds like he’d rather be somewhere else.)

But two days before the primary, Rubio is in third place in the polls in the Palmetto State, and—not-so-fun fact—no third-place finisher in this state has ever gone on to win the presidential nomination. One reason he trails Donald Trump and Ted Cruz is because at this moment the Republican past is crushing the GOP’s future. Rubio is getting hammered on the airwaves by his opponents for being too soft on undocumented immigrants. And his promise to usher in a new generation is being drowned out by the ultranativist promises of Trump, who derives much of his support from his pledge to build a gigantic wall on the Mexican border and his proposal to ban Muslims from coming to the United States.

Even as South Carolina has welcomed and embraced its Benetton conservatives, a huge chunk of Republican voters are apparently motivated by the traditional divides. For Rubio, this is an existential challenge: What happens to the candidate of the future if the future isn’t really here yet?