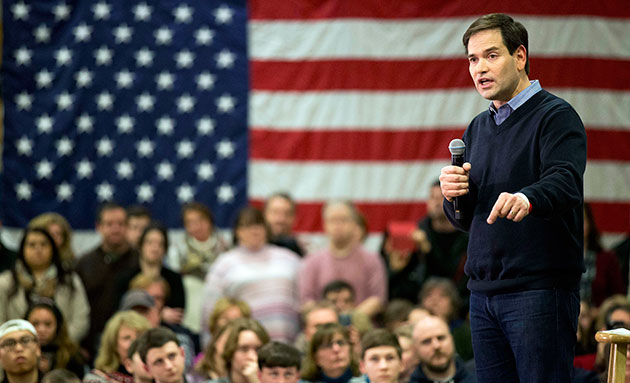 Marco Rubio is on the move.

That’s what his supporters in New Hampshire eagerly tell reporters at Rubio campaign events, after the Republican senator from Florida placed third in the Iowa caucuses. As proof, they point to the increased number of camera crews trailing Rubio, who’s making a bid to claim ownership of the so-called establishment lane in the GOP contest.

Indeed, among the media masses assembled in New Hampshire Rubio is topic No. 1. How far can he surge? Can he win? Donald Trump—remember him?—has become almost an afterthought. And at a town hall meeting at Hood Middle School in Derry on Friday evening, Rubio exuded confidence and energy before a crowd of about 400. He stuck mainly to his stump speech, with its blend of partisan anger (a power-mad Barack Obama has nearly brought the United States to total ruin) and generational hope (only a young, forward-looking leader can make this century the greatest one yet for the United States).

And it played well. The audience members listened attentively as Rubio proclaimed, “I know why you’re here.” He later added, “You understand…that this election is different…It’s a referendum on what kind of country do you want America to be in the 21st century.” They cheered when Rubio bashed Obama (claiming he purposefully has divided the nation) and promised to rip up the Iran nuclear deal on his first day as president. He also pledged to end Obamacare, to save the supposedly imperiled Second Amendment, to smother Common Core, and to get tough (somehow) on immigration. They also applauded loudly when he vowed that he would unite the nation.

“I will be a president for all Americans,” he exclaimed. Few, it seemed, noticed the conflict between his hard-edged assaults and his pledge to heal a divided nation.

Talking to several Rubio backers in attendance, I got the sense that they really fancied the idea of Rubio. Asked why they were supporting him, each cited Rubio’s “positive vision.” As a follow-up, I asked these Rubio-ites to describe that vision. Each said a version of this: to make America better. So, Rubio has figured out a way to tap into Republicans’ dislike (or hatred) of Obama and Hillary Clinton—the crowd roared with delight when Rep. Jason Chaffetz, a Rubio endorser, introduced Rep. Trey Gowdy, who heads the House committee on Benghazi, and mentioned the B-word—while also coming across, at least to GOPers, as not a mean guy. (And the GOP pack already has mean guys in the lead.)

At the same time, Rubio proffers vague policy prescriptions of the usual conservative fare—advance free enterprise! cut taxes!—yet is seen by his fans as a visionary and man of the future. This is all a pretty neat trick, and a good reminder that presentation is 90 percent of politics. Or maybe more.

Rubio tossed out one line that did warrant unpacking. Early in the speech, the 46-year-old self-exiled senator irately declared, “This generation of leadership is the most selfish generation of leadership we’ve ever had in DC.” This seemed to be another dig at Obama. But Rubio went on to assert that for 15 to 20 years, this gang of lousy leaders has “done nothing about the national debt.”

Twenty years? That would mean that the “most selfish generation” included the entire George W. Bush presidency. The folks in the crowd nodded as Rubio issued this denunciation. Did they realize he was indicting the last Republican administration? And coincidentally—or not—this dig was a harsh assault on the brother of his mentor turned rival Jeb Bush.

Rubio is pushing generational change as a primary reason for his presidential bid. (After all, in his campaign speeches, he does not spend much time detailing his previous accomplishments.) And he’s willing to indict the Bush crew to make this point. As Rubio rises, this is more salt in Jeb Bush’s wounds—and another indication that Rubio is quite good at making an attack seem positive.