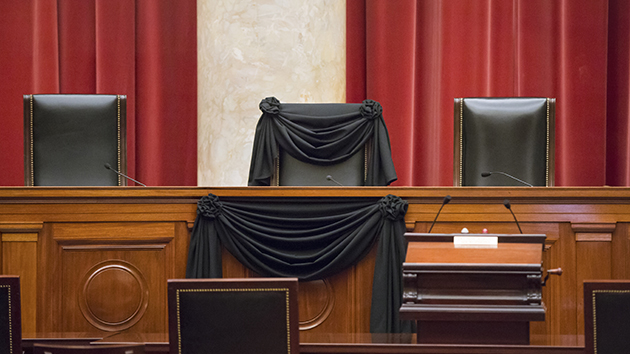 As Republicans and Democrats gird for a showdown over when and with whom to replace the late Supreme Court Justice Antonin Scalia, the political question is which party will benefit from the battle. If a new survey is any indication, Republicans could end up sacrificing seats in the Senate if they refuse to allow a vote on President Barack Obama’s nominee until after the elections in November.

The Democratic-leaning firm Public Policy Polling (PPP) released a survey Monday showing the political peril of objecting to any nominee Obama may put forward, as leading Senate Republicans have indicated they will do. The danger may be greatest for Republican senators up for reelection this year in purple states, including the subjects of the PPP survey, Sens. Rob Portman of Ohio and Pat Toomey of Pennsylvania. Both senators have taken the position that the next president should appoint Scalia’s replacement—and both have been attacked by their Democratic challengers for holding this stance. For Republicans, whose hopes of confirming a conservative replacement for Scalia next year could hinge on retaining control of the Senate, the poll results are bad news.

In both states, 52 percent of respondents said they were less likely to reelect their current senator if the senator refuses to confirm any replacement no matter whom is nominated. Only 25 percent said a blanket refusal to confirm an Obama nominee would make them more likely to vote for reelection. Among independents, again, the numbers are even worse for Portman and Toomey.

The battle over Scalia’s replacement is just getting started, and voters are still making up their minds about it. Both parties, as well as outside groups, are only beginning their public campaigns for and against an Obama nominee. But for Republicans hoping to hold onto the Senate—which would require the reelection of Republican senators in states such as New Hampshire, North Carolina, Wisconsin, and Illinois, as well as Ohio and Pennsylvania—this is a first indication that obstructing a vote on the president’s Supreme Court pick may take a political toll.